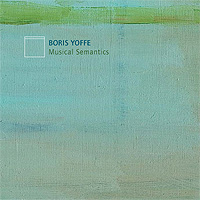 There used to be, and maybe still are, children’s books with magic pictures. You stared intently at a page awash with dots, ticks and lines, curves and other marks until suddenly a meaningful image emerged from the chaos. At one time you might see a castle, another time it would be a river and a path winding up into the mountains, next time you’d see the portrait of a famous personality etc. And sometimes all your efforts were in vain and you saw nothing. To me, Boris Yoffe’s music is like these pictures.

Before finding their own language, young composers often experiment with a variety of stylistic approaches and in doing so willingly swim along in the wake of various fashionable trends. The path taken by Boris Yoffe represents an altogether different development: from an early age he had an inkling of how to go his own way. By the time he had chosen his own path, he walked it with confidence, without veering from it too much or being tempted by beauty foreign to him. This probably led to his homogenous and assertive style; once you’ve internalised his music you’ll never confuse it with someone else’s; and if you’ve heard a dozen of his works you will recognise his signature style in the next one as well. There’s something else that Yoffe’s music merits: it is honest and pure at the same time. There’s not a sound in it that seems to come from anywhere but from deep inside and there’s not a superfluous note in it.

And one other thing: Yoffe’s music, although unmistakably contemporary in language and technique, is equally rooted in tradition – in the anthropocentric tradition that has dominated European music for the past four centuries (and is still present in the 20th century – just think of Bartok, Prokofiev, Shostakovich and of course the composers of the Second Viennese School). Yoffe’s music resembles a narrative about a self, often in the form of a first-hand account. Like magic, the blotchy chaos of dots, lines and curves turns into a psychological portrait of the modern intellectual, a sensitive and educated person, with a penchant for reflection and filled with emotions and sensations that are difficult to express. Indifferent towards the prose of social and political events, this “self” remains anchored in the world of art, philosophy, history and religion. Through his realisation of this complicated world using a complex and, at the same time decidedly ascetic technique, the composer is condemned to writing elitist music, one that talks of matters not familiar to everyone and addressing only those who can and want to comprehend it.

The key to understanding the musical poetry of the composer can be found in his quartets. All of the succinct miniatures (Gedichte [poems] as Yoffe calls them) are in one movement and loosely joined in a macro-cycle, the Book of Quartets (Quartettbuch). The cycle remains open; new pieces are added regularly. Seven of them have been included on this CD (tracks 11-17). They have a lot in common, as tends to be the case with poetry written by an author who chooses a heartfelt leitmotif (life, death, love, youth, old age etc.). A string of expressive, “speaking” motives that alternate without haste, melt into each other, and weave together in strict and unusual harmonies, before parting once more. The tempo is modest, the rhythm well-balanced. All this creates a solemn, pensive character, as of being deep in thought – once thinking about the essential, once about the seemingly accidental. The character of the quartets is, to varying degrees, also present in many other instrumental compositions by Yoffe, such as the sonnets for viola da gamba (Sonetten, track 9), Aria for string trio (21) or Essay (18). These pieces are more expressive, their music contains more emotional changes and – as opposed to the poems – it is possible to detect an address, directed outwards, towards a visible or invisible dialogue partner. This characteristic and lively speaker’s voice is almost absent from the vocal cycle “Vier“ (1-4) – if present at all, it can be detected in the voices of the accompanying instruments. These songs could be called “sacred chants”. The lyrics are presented in a way that seems to speak by itself, without requiring recital. The first two songs, “Villon“ and “Mandelstam“ resemble epitaphs breaking into speech. (Individual letters, even whole words have been erased over time and what remains is to guess the meaning of what once was – no more is needed but to listen to the musical accompaniment!) The remaining two are what he calls “holy lore”: somebody is reading a religious text from invisible tablets. Outwardly, the reader remains restrained, the masses freeze in their tracks, awestruck… In this way, events and figures from the past, even from the primordial past, enter our modern life. Another “Spiel of the times” is offered in the composer’s arrangement of D. Gabrielli’s work (5-8). Thanks to the Kommentar (commentary), the 17th century music is transported into the decades and centuries of the future, to the 18th, 19th and at times the 20th century… Yoffe’s programme music is unusual and paradoxical: it seems as if the title is not deemed to explain the music but rather that the music seems to comment on the announced programme. “Sechs Entwürfe“ [six drafts] (10) is the story of an unrealised work of art. The first draft is the moment where the future piece reveals itself to the artist as a whole and in great detail; the last one is a dry description of the piece that could have been, but never was. Baum [tree] (19). Don’t expect the description of a vulnerable sapling here that grows, over time, into a mighty, deeply rooted tree. The entire piece, with its scant imagery (note the bassoon solo) and capricious rhythmic accents can more easily be associated with the art of mime (think the unique Marcel Marceau – who with only a few gestures could describe and express the big and the small, the minute and the immeasurable). And what is the basis of human dignity (Oratio…, track 27)? It is neither the worshiping of fellow men, nor the awareness of one’s own greatness, neither pride nor hubris – but a friendly and light disposition, only benevolence and a clean conscience. …Boris Yoffe’s music has substance, yet isn’t easy to comprehend; like any truly elitist music it doesn’t easily find its way into the listener’s ear and soul. In order to understand and internalise it, the listener has to make the first steps towards it of his own accord, so that the beauty of this music will be given the chance to reveal itself. And whoever dares to take these steps will certainly be richly rewarded.