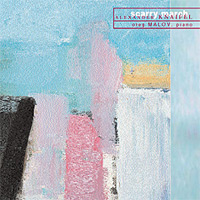 Alexander Aronovitch KNAIFEL was born in Tashkent on November 28 1943 from a family of musicians. The war had led his parents to Siberia, but they managed to go back to Leningrad in September of 1944. At the age of seven, the young Alexander, who was destined to play the cello, went to the Rimski-Korsakov school, where his father taught violin and his mother various theoretical subjects. Between 1961 and 1963, Knaifel improved his cello playing in Moscow, but after coming back to Leningrad, he abandoned the instrument and applied at the Moscow Conservatory, with a small piano sonata which allowed him to start the second year of composition with Boris A. Arapov. He had already started writing an opera based on Oscar Wilde’s story “The Phantom of Canterville”. Knaifel wrote a musical portrait of the latter character, an organ passacaglia (of which a transcription for piano by Oleg Malov is included). In the sixties, Knaifel wrote several dance pieces: a symphony-ballet in two acts, “Eternal Efforts”, a ballet called “Medea”, small choreographic scenes for Leonid Jakobson, and lastly “The sparrows of Petrograd” (1968), a phantasmagoria for children. However, it were two other works, the strictly instrumental “Lamento” (1967) for cello solo and the strictly vocal “Monody” (1968) for female voice, which would bring him his first international fame. “A prima Vista” (1972), performed in Cologne in 1979 as a collective improvisation for four percussionists, was condemned by Tikhon Khrennikov, as Knaifel, together with Denisov, Gubaidulina and four others, had given a wrong image of Soviet music.

Although Knaifel was fascinated by cinema in his younger days, his parents wouldn’t encourage this non musical calling. He made up for it by writing over forty soundtracks, in particular for the director Semion Aronovitch. Despite this quite intense activity, only two works would mark the seventies. Knaifel completely reshaped a ballet on Joan of Arc which resulted, in 1978, in “Joan, Passion for 13 instrumental groups and 56 soloists”. From this work onwards the number, which had always been fascinating to Knaifel, would enter his compositional process. As with Gubaidulina, it features both rational (by formalising the structures and proportions) and spiritual processes (by extracting magical and symbolic forms through some kind of magic numbers). Both musicians are thus joined by a Pythagorean conviction that the Universe is built on a harmony of numbers and proportions. Knaifel says: “In Jeanne I discovered the number, in Nika, the word.” This other big work called “Nika, 72 fragments by 17 performers” (1973-74) indeed combines numbered parameters and a peculiar use of words taken to the edges of sound and inversely: like seventeen sphinxes, the performers express the words of the enigmatic sentences taken from Heraclitus (Eternity, a child playing dice), from Dante or even from Nika Turbina, a poem writing child who once said: “It’s not I who is writing.” This assertion is closely akin to Alfred Schnittke’s and Knaifel’s idea that it is a voice from elsewhere that is dictating their works.

A third dimension, childhood, was magnified in the following composition, written in 1981 for Knaifel’s wife, the singer Tatiana Melentieva; it is called “The Stubborn Horse” and features a cycle of fifteen melodies. The attraction of Knaifel to “Alice in Wonderland”, to the beyond of the mirror, was confirmed in the same period by a note in Knaifel’s personal diary: “Faced with such a period and such a world, I’m feeling like a stranger.” Thus Knaifel cannot be categorised, just as his colleague from Saint-Petersburg, Galina Ustvolskaya cannot be, although their registers differ fundamentally. The latter is definitely a stranger to the surrounding world, while Knaifel continues to address it and sometimes even to reflect its most concrete realities, like in the composition called Chrami Marcha. However, the greater part of his works written from 1985 onwards reveal another orientation. Their titles actually evoke a religious preoccupation: “God” (1985), based on the well-known ode (1784) by the first Russian poet, Gavrila Derjavine, “Agnus Dei” (1985), “Litany I and II” (1988), “Quiet Light” (on texts of the Vespers), “Ascension” in 1991, “Jacob’s Ladder” (1993), “O Celestial King”, prayer of the Holy Spirit (1994), and lastly, “Chapter Eight for choir and cello”, created by Rostropovitch in the cathedral of Washington in 1995. However, not one of these scores has any precise liturgical or denominational meanings. Born of a non practising Jewish family, Knaifel declares himself attracted both by orthodox religion and by Buddhism, although his actual religion is beauty. “To me, beauty is the most important thing, it is the energy, the inexhaustible, the burning moment, fire.” As Heraclitus announced it 2,500 years ago (Fragment 90: “Everything is exchanged for fire and fire for everything.”), this alchemy of beauty is even retold by Knaifel, saying: “It is only by consuming oneself, that one liberates the energy from which beauty can result.” Such a message is all but Promethean. It would sooner be the little flame, almost forgotten deep inside of oneself, which gently sparkles in the pages dominated by calm and silence, by sonorous refinements on the edge of audibility, and the abolition of the feeling of duration. Did time come for such a timeless music? Knaifel sometimes doubts it, while wondering whether such a time will ever come, as it seems so far away from the problems of the world. The audiences that have developed both through recordings and concerts around the music written by Pärt, Kancheli, Nono, Crumb or Feldman all prove him wrong. This recording will undoubtedly add Alexander Knaifel’s personal dimension to it.

The Russian title "Chrami Marcha" could be literally translated as “The Scars of a March”. The March being one of the musical archetypes of collective optimism, the work undoubtedly deals with the scars of the Soviet period. After a few sporadic chords, a magnetic tape produces a sound montage of well-ordered and repetitive life of socialist realism: the hammering of boots during parades, regular acclamations by the crowd and, as a counterpoint, the water closet in community apartments. So many sonorous “scars” from a past fading away and leaving their waste on the beach, like the waves of the sea. The only thing left is the regular beat of time ceaselessly passing by. It’s pulsation joins the return of the piano, while the latter becomes solemn and meditative, torn between the linking of dark chords and the weight of silence which separates them. The third part joins the repeated piano notes and electronic drones. It brings us close to minimalism with its slow harmonic changes. The last part returns to the solemn register of the piano in a more dreamlike atmosphere. It evokes the bells of an abandoned church in an endless plain, which is now and then hit by a lost bird. These ghostly sounds slowly fade into the immensity of a silent landscape, which is the complete antithesis of the streets and squares where the indoctrinated crowds march.

The Passacaglia (1965) brings us back twenty years earlier. Knaifel was only twenty-two when he wrote this work which was strangely integrated in the opera The Phantom of Canterville based on Oscar Wilde, in which he gave a musical portrait of the phantom. 1965 was the first year of Brejnev’s government. The “Pravda” wrote some articles that were favourable to creative freedom. It looks as if the condemnations of formalism were already forgotten, although dodecaphony was the bête noire at that time. Still, the latter is subjacent in numerous compositions of that period, although this one could better be titled Prelude and Passacaglia, because the thirteen first tempos feature a succession of introductory chords before the dodecaphonic theme of the passacaglia is expressed. Nine of the then variations leave much space for Bach-like ornaments: caustic, cadence trills… But tone keeps its sovereignty in spite of the abundance of alterations and the tonal ambiguity which ends the work.

Alexander Knaifel’s recent evolution leads towards a growing deprivation, a melancholic reverie out of which spaced and rarefied sounds emerge mysteriously, while the composer seems to expect a new type of revelation produced by its slow resonance. This process, which is closely related to esotericism, is here represented by an instrumental piece (Postlude for piano) and a vocal piece (Prayer for voice and instruments, here the piano). Arvo Pärt had already explored these minimal limits of musical language in his pieces for piano of 1976: “Für Alina” and “Variations on the occasion of Arinuchka’s healing”, thus blending personal emotion (it involves his two daughters) and the extreme modesty of he form. The “Postlude, in a kind of exhausted dream”, which was taken from a friend of the poet Pushkin called Fjodor Tioutchev but was dedicated to the memory of a friend who died in 1992, Max G. Orlovski probably hides a similar feeling. Short sentences, essentially in monody, interspersed with long silent moments, occupy space and time, woven with the slender threads of melancholy and devotion.

The religious dimension is here unambiguously displayed in the last piece, a prayer to the Holy Ghost called “O King of Heaven” for voice and instruments. The deprivation is more luminous and associates two monodies, the first for soprano with a very pure voice and the second for piano, which was chosen here. The text is that of a simple liturgical prayer: “O King of Heaven, Comforter, Spirit of Truth, who comforts and is everywhere and in every thing, treasure of goodness and Creator of all life, come to us, come down to us and cleanse us from every sin and save our souls, Blessed God.”

Knaifel thus shares the return to simplicity and interiority that are also characteristic of numerous compositions by Gorecki, Arvo Pärt or Giya Kancheli, three composers with completely different backgrounds (Poland, Estonia, Georgia) but marked with similar scars. Knaifel’s music seems both more radical and ingenuous, as he confines himself to be nothing more than the murmured echo of an inner listening which is far removed from the aestheticism which preoccupies (post)-modernism. The stigmata of belief have replaced the ideological scars.

All compositions on this CD are first recordings. The composer’s choice of Oleg Malov is a natural one, considering he has been a friend and colleague of Knaifel for thirty years. The composer marvels at the way Malov plays the piano: explosive energy combined with an extremely delicate touch, as if predestined for his music.