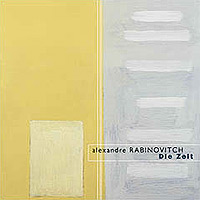 It is obvious that music and time are inseparably linked. However, the development of the musical discourse within time can take various forms: a) it can be linear and evolving in one direction. From the perspective of the monotheistic religions or that of Mazdeism, the arrow of time is directed towards a clearly defined end, and time has only one beginning. This type of evolutionary model is broadly outlined in Beethoven’s 5th Symphony, which starts with the recount of the dramatic creation of the universe and ends with the Advent of the Messiah; b) in contrast to this conception of time which emphasizes history, a few oriental religions such as Hinduism, Buddhism, archaic societies as well as philosophers in Ancient Greece saw time as a cyclic phenomenon. I am thinking, in particular,of the concept of karma or that of the eternal return.At the time, the rites of regular regeneration of time played a major part, and Eliade writes about the “cosmic combustions or dissolutions that must regularly put an end to the universe to ensure its regeneration”. In that circular view of events, musical time becomes an environment of multiple changes, and takes on a rather static form, as opposed to the dynamic of the Becoming, which moves towards a messianic end or simply towards death (as in gnosticism or existentialism). Ravel’s “Valse” or “Bolero” are a good example of the cyclic discourse in its temporal development, which does not, however, deprive it of its evolutionary aspect; c) in addition, there is the time of the mystics, striving for the abolition of time. Secular time is thus transformed into sacred time, the instantaneous character of which can be symbolized by a circle or a small dot. Amongst musicians, Mozart possessed this ability to retrace his symphonies in his mind as a whole, meaning that he was able to instantly have an overall and complete view of his compositions. On a psychological level, the conception of sacred time applies to unity of consciousness.

Drawing a parallel between the three movements of “Die Zeit” (“The Time”) and the three aspects of time that I just outlined, I would now like to give a few more details:

1) The concept of impulse or of Bergson’s “vital impulse” is very evocative for a musician: the notion of a force, an energy setting up a progressive system and nourishing, stimulating and supporting its development. However, according to physicians, the evolution of a system is constantly compromised by the chaos and entropy inherent in every form of energy. For the vital impulse to recover the initial dynamism, its batteries must be regularly recharged. In short, in this first movement I wanted to bring out the ambivalence and internal anomalies present in the concept of impulse itself, especially since it is now known that even the “will to live” set up as an absolute has not yet been able to prevent the extinction of numerous animal species.The species of the “willing machines” driven by their “desire for power” is now in turn in danger of becoming extinct as a result of their activities, which are autodestructive as well as destructive towards their ecosystem.

2) The cycles of a clock’s regular rhythm pattern convey, in a certain way, the circular nature of cyclic time. In their path around the center, the hands on the square or round clocks always come back to their starting point. This continuous repetition of their movements resembles a ceremonial. In the second movement,“The Clock”, I have thus attempted to tame the mobility of changing forms through ritual, in which the musical journey is completed in 6 tonalities, coming back to its starting point once it is finished.

3) A few years ago, as I was staying in a hotel room in a skyscraper in Tokyo, I spent a lot of time in the middle of the night observing the continuous, uniform, perfectly homogeneous and silent flow of the myriad of cars, with all their lights on, on a one-way freeway.This was such a striking sight that I started to get a deep feeling of the out-of-time experience alluded to by Buddhists or mystics. Jaspers makes a subtle comment on the relationship inside the time-eternity couple, mentioning the “premonition, thanks to this [life] force, of eternity through life”. In my case, the duration of a spellbinding experience took the form of a suspension of time. The word “duration” used for this last movement should be understood in that sense. A. Rabinovitch, 12/11/2000 (translation: Maria Balkan) (for the first performance on December 20, 2000 at the Köln Philharmonic Hall)

“Récit de voyage” (“Story of a Journey”) [1976] In 1976, two years had gone by since I emigrated from the Soviet Union. This realization made me reflect over the hidden meaning of the parable of the prodigal son in the Gospel according to St. Luke. As I was thinking it over, several poles of attraction came to mind for translating this theme into music: 1) The call-motif of Beethoven’s Sonata op. 101: a musical allegory of the incitement to travel; 2) The obsessive rhythm of Schubert’s “Wanderer-Fantasy” op. 15, symbolizing the journey itself; 3) Wagner’s “Tristan chords”, which represented a certain ideal for me: in “Récit de voyage”, this motif of Tristan appears distorted and grimacing; 4) A second motif from Schubert’s “Wanderer-Fantasy” representing a state of extreme emotional confusion.

To my surprise, I recently discovered in the Lotus Sutra the existence of a Buddhist counterpart to the Christian legend of the prodigal son.This information was very reassuring for me as to the choice of this theme as a universal theme. Buddhism being more profoundly mystical, I feel more deeply affected by this oriental interpretation revolving around the quest for enlightenment.

With regard to this old recording, I am very grateful to the performers taking part in it.Their playing is superb. I only blame myself for somewhat restraining the fire and spirit of their playing. In retrospect, I would have chosen a slightly more restless and not such a “wise” tempo. A. Rabinovitch, 01/02/2001 (translation: Maria Balkan)

“Perpetuum mobile” [1975] I believe that the title “Quasi-Perpetuum mobile” would have suited this work better, since the role of perpetuum mobile can only be attributed to the Absolute – or Demiurge – overseeing the creation of the world. In that sense, the title can be seen as misleading. However, it is a known fact that the so-called perpetual motions are widespread in the macroscopic and subatomic universes. I am thinking of the very beautiful and extremely musical theory of the superstrings expounded by physicians, which suggests the idea of a continuously vibrating universe. The symbol of the wheel also conveys the idea of a continuous rotation of all the components of the cosmos. What comes immediately to mind are the inevitable pulsars, the galaxies, the rotary whirls of the interstellar clouds, or simply planet earth, which could well become uninhabitable for a certain animal species. The whirls of the human psyche are similar to the macroscopic perpetual motions and take part, in a way, in this symphony of universal rotations. The original motif of the piece can be perceived as the archetype of an energy reservoir, and is supposed to translate into music this basic vibration-rotation that exists in the material world as well as in the obsessions and turbulence of the psyche.After many continual changes in the motions of the soul, this energy reservoir finally dries up: there will be no perpetuum mobile. It is time for the hectic dynamic set off by the activity of the whirling motif to give way to contemplation.The previous agitation was only a figment of the imagination. A. Rabinovitch, 02/02/2001 (translation: Maria Balkan)

“Musique expressive…” (“Expressive Music…”) [1976] In this work, a forced marriage between two themes is completed, the emotional charge of which are seemingly incompatible: 1) The infinitely sad motif borrowed from Carl Orff (“Oedipus der Tyrann”) and 2) the final passage – of a jubilating nature – of Chopin’s Etude op. 25 n° 5. It’s not up to me to determine the solidity of their relationship. A. Rabinovitch, 02/02/2001 (translation: Maria Balkan)