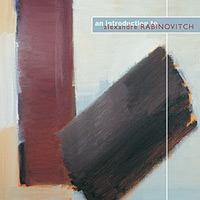 About ALEXANDRE RABINOVITCH
An introduction to Alexandre Rabinovitch

Alexandre Rabinovitch, born in Bakou in 1945, studied to become a composer at the Moscow Conservatory with D. Kabalevski and A. Pirumov. From his early oeuvres onwards, Rabinovitch distances himself from the official standards and opts for three cantatas of texts written by early 20th century avant-garde poets, viz. the symbolist Andrej Biély, the futurist Vledimir Khlebnikov and Leonid Andrejev, a pessimistic metaphysician who was sometimes referred to as the Russian Maeterlinck. As an excellent pianist he plays Schubert, Brahms and Scriabine, as well as Messiaen and Stockhausen. In the sixties the Soviet Republic is increasingly infiltrated by western modernism, in particular by the serial movement of the post-Webern era, which was represented in Moscow by Ph. Herchkovitch, A. Volkonski and N. Karetnikov. Rabinovitch hardly participates in the movement because he believes the tonal tradition should be innovated and reformed, rather than discarded.

Rabinovitch also ventures making collages, but, as was the case with Arvo Pärt, this will turn out to be a transitional phase. In 1970 he sees his colleague and friend Alexei Lubimov reading a score entitled In C, written by a young Californian composer called Terry Riley. A single sheet of paper contains 53 modules made up of short melodic fragments. Each consecutive module may be repeated by each musician as often as he chooses. This way of writing emphasises two dimensions that have hardly been explored in western music. On the one hand, the repetition of one particular musical element (a chord or a melody) entails subtle changes in the way it is perceived by the auditor (In the sixties La Monte Young had already given a concert during which he had repeated one single sound or chord a hundred times over. Admittedly, this was in the middle of the psychedelic period). On the other hand, the aleatoric process of the superposition of different performers results in a harmonic polyphony that slowly metamorphoses into something else. These ideas, taken over by Steve Reich, Philip Glass and John Adams (with composers such as Michael Nyman and Louis Andriessen for the European branch) are the fundamentals of the minimalist movement that is well-known today.

In C has the effect of love at first sight on Alexandre Rabinovitch. It pushes him towards compositions that develop into repetitive fragments, at the beginning of simple musical cells. This time around, however, they are inspired by earlier compositions (viz. by Schubert, Brahms or Wagner), that are inextricably connected with our musical consciousness. Thanks to its mystical nature, derived from the eastern mantras, the esoteric cabbala or the gnosis, this new orientation was not easily accepted in Soviet musical life during the reign of Brejnev, who was always pleased to see dissident artists such as J. Brodski, A. Volkonski, A. Solchenitchine or M. Rostropovitch leaving the country. Rabinovitch follows their example in 1974.

However, this exile causes him some disenchantment as there seems to be little room in Paris for his aesthetic orientations. They are too different from the dogmatism imposed by a small group of people, who exclude other artists in the name of modernity. This setback will inspire the slightly ironic piece for the piano which he writes in 1976. It is called Motif optimiste suivi de sa démystification et ainsi de suite (optimistic motif followed by its demystification etceteras), which ironically opposes the euphoria (in major) of leaving the USSR to the depression (in minor) of finding out that censorship had followed him to Paris. Still, Rabinovitch manages to make a name for himself thanks to his successful recitals and his association with Martha Argerich.

Requiem pour une marée noire (requiem for a black sea), written in 1978, is a philosophical rather than an ecological protest, as it is based on a few verses by Fiodor Tioutchev (1803-1873), a philosophical poet who successfully described how anything related to mankind (symbolised in this case by the black sea) is the exact opposite of the durability of the mind and the dream, of sky and stars. Committing his engagements to paper, the titles chosen by Rabinovitch – Pourquoi je suis si sentimental (why I am so sentimental), Discours de la compassion (exposition of compassion), Musique triste, parfois tragique (sad music, sometimes tragic ), etc. – were not completely without provocation to a musical environment where complex language, the posh obscurity of titles (Anarchipel, Explosante-Fixe, Partiels/ Dérives) and wise comments incessantly repeated that there was no room for simple, beautiful or sentimental music. In 1980 Rabinovitch liberates himself from Paris and leaves for Geneva. In 1982 he composes the Discours sur la délivrance (exposition on deliverance) for cello and piano. The melodic modules are repeated according to the specific indications of a score that uses the numeric symbolism inspired by esoteric traditions. Instead of being made up of volatile passages that are often misheard by the listener, music becomes a mysterious trajectory. We are not dealing with the contemplative reveries of the 'floating' kind that have become so popular. The rhythmic structures are firm and sometimes as violent as a destructive trance.

This is beautifully illustrated by oeuvres such as Musique populaire (popular music), which is a genuine reflection on violence and things sacred and was also inspired by the works of anthropologist René Girard on this subject. Alexandre Rabinovitch' singular sonorous universe is therefore situated outside the contemporary or even minimalist movement. The search for his individuality is the key to his music. His own comments confirm this statement: "Most of my inspiration comes from doctrines of the past such as Gnosis, Cabbale, Pythagoras… My music is a study on the development of the conscience and its metamorphoses and of the learning process towards finding serenity. The repetition of the motifs are necessary in order to create the appropriate mysterious atmosphere for an exposition based on the logic of the perceptible and inspired by the eye of the heart." The repetition of a theme is frequently used for mystical constructions, be it in oriental music and prayers or in western religious architecture. In this case,

Rabinovitch lends his composition a musical expression that borders on obsession. Before penetrating in these labyrinths of the inner self, the auditor should realise that the adhesion of his personal sensitivity will be his only guiding principle.