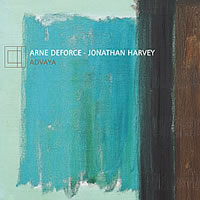 ARNE DEFORCE IS ONE OF THE MOST EXCITING NEW CELLISTS I HAVE COME ACROSS. EVERYTHING HE PLAYS IS APPROACHED WITH A POWERFUL INTENSITY BORN FROM AN ENGAGEMENT WITH THE MUSIC ON A DEEP SPIRITUAL AND PSYCHIC LEVEL. HE IS HIGHLY IMAGINATIVE AND BRINGS AN ORIGINALITY AND, ABOVE ALL, CREATIVITY TO HIS INTERPRETATIONS WHICH IS BOTH FIERY AND STRUCTURED. HE HAS TAUGHT ME THINGS ABOUT MY OWN MUSIC, AND IT HAS BEEN A PLEASURE TO WORK WITH HIM. HIS RECORDED IMPROVISATIONS BEAR TESTIMONY TO THIS SPIRIT; THEY HAVE INFLUENCED MY WRITING FOR CELLO NO LITTLE. HE WILL ALMOST CERTAINLY BRING A PROFOUND LEVEL OF EXPERIENCE TO WHATEVER AUDIENCE HEARS HIM.

ADVAYA (1994) was the fruit of a commission from IRCAM. There, with Cort Lippe as assistant, we researched into a new spectral grammar, that is to say, an ordering of harmonic series transformations that is simple, expressive and logical. It takes as foundation the fact that if the same number of cycles per second is added to EACH partial, a tranposition is effected which at certain points reduplicates the original harmonic series but with the fundamental or 2nd, 3rd, 4th etc. harmonics left out. Between these goal-points of repose come all the other points where various distortions of ordered dissonance, or 'roughness' occur. This parallels exactly the tonal system where the basic triads are varied by in-between dissonances with more complex ratio relationships governing the intervals. The open A string (note the A's in AdvAyA) is the 'object' which the computer transforms with these so-called spectral compressions; and this interplay between the 'consonance' of the natural string harmonics and the 'dissonance' of their distortion informs the flow of the piece's energy. Advaya is a Buddhist term for non-duality. The energetic flux and yet assertion of the unity of the sound world – which is composed entirely from cello sounds, despite the appearance of two performers (cellist and keyboardist) on stage – is the main connection with Buddhist notions of tantric formal emptiness. The dominating wedgeshape which always leads outer pitches back to the central A of the A-string is a symbol of unity too. In this performance Arne Deforce uses a midi pedal controller and system made by Jean- Marc Sullon, so he is able to determine the treatments' timings exactly. His creativity as a cellist is an important part of the performance (seemingly so surrounded by technology); indeed his extraordinary improvisations have exerted a considerable influence on the composer in later works. The 'performer as magician' is essential to a work like Advaya, which traces a journey through the sky, as it were. And I am happy to couple my music with his on this CD. By contrast to the lengthy research on Advaya, CURVE WITH PLATEAU (composed in 1982) was created in a brief burst of spontaneity, in one sitting. A little later polishing and it was finished. It shows lower and higher levels of human personality: the physical and muscular, the emotional, the thought level (which becomes ever more refined) and at the top, spiritual transcendence, which approaches silence. Descending the curve, one hears that the last element to appear and disappear is the physical, which shudders into the extinction of a heroic human life.

LIMEN and RITI are two ‘composed improvisations’ recorded on a stormy night (November 6th 2000) in the fabulous acoustic of the Romanesque chapel La Font Sainte in the mountains of Auvergne, France. The concept of the pieces is referring to my belief that the body of a musician is full of gestural knowledge which can only be expressed by the corporal language of instant improvisation. Both are intuitive compositions, with a strong idiomatic preconceived structure, and based on direct physical contact with the cello. In this sense they are not only improvised but also instantly composed. Limen and Riti have been recorded ‘live’ and are presented with no processing. RITI is the result of a research on strong pulsations and varied sound continuums on the extreme low tones of the cello. It is inspired by the sound world of old oriental ritual vocal traditions such as Japanese and Tibetan Buddhist chant. For this reason the four strings of the cello – its ‘vocal chords’ – have been removed and replaced by 1 G and 3 C-strings, one in gut, all of them tuned down to a microtonal scordatura. This unusual combination of strings and the low tension of the detuned strings allow fascinating ways of polyphonic playing, creating surprisingly sonic textures.

The piece is conceived like a ‘journey’, a quest for the energy of sound, streamingly intense. Riti is dedicated to the memory of Giacinto Scelsi, composer of ‘real time’ intuitive music. The idea of LIMEN developed through my interest in the harmonic sound spectra of the cello. The music explores the transition between diverse productions of sound. Inspiration came from the Latin word Limen, meaning path or passage between two fields, the distance between two edges, the path between two borders – a path which uses its ultimate borderlines to clear a way, as if one of the edges starts to approach the other without being able to reach it. Limen is thus path and cleft, musically transformed into the game of constant shift between the ‘outer’ and ‘inner’ limits of cello playing. Exploring the infinite passage between silence and sound, tone and noise, string and corpus, time and space, motion and standstill.