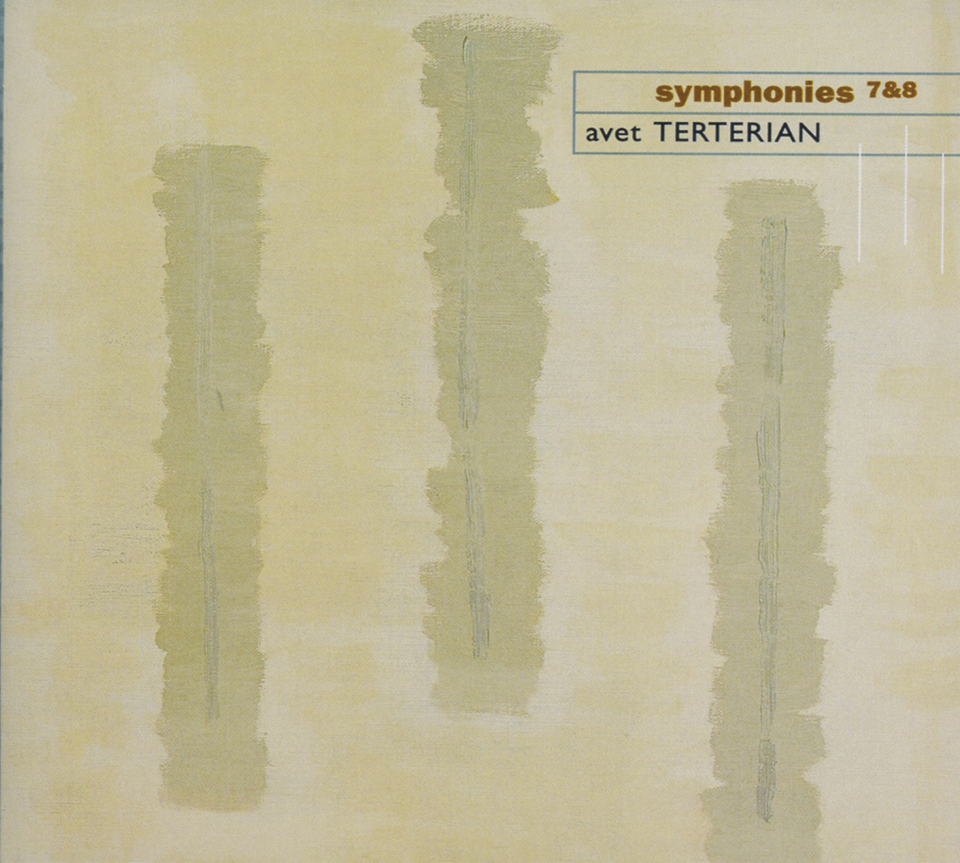 Between 1969 and 1989, Terterian composed 8 Symphonies that can be regarded as one homogenous body of work. These are 8 chapters of a grand epic that deal with the eternal questions concerning our earth and the universe, nature and God, mankind and individual, good and evil, life and death. In this respect, Terterian continued the genre’s grand tradition established by the likes of Beethoven, Mahler, Skrjabin and Shostakovich, who treat a symphony not only as the expression of a musical, but also as a deeply philosophical world view.

“The music never ends,” Terterian said in one of his last interviews. “Nothing and no one can stop the flow. It is programmed… and as far as the means used by the composer are concerned, it is possible, while searching for additional expressive power, for certain phenomena to surface. These phenomena can lead to a contradiction with something. I would compare it to the gradual construction of the “House of Culture”. This house creates a new foundation for the next house of culture, and the next, and the next, etc…” Terterian’s construction is shaped according to laws laid down by the composer himself. He tried to merge the modern means of musical language (somewhat like the principle of ostinato, aleatoric and sonorous music, microphonics, polyphonics, etc.) with traditional folk music in order to create this “new expressive power”. Gennadi Roshdestwenski is one of his best interpreters and he is particularly partial to the Fifth Symphony. He wrote the following comment : “The most important component in Terterian’s music is the fact that time is the soul of his music. The propagation of the sound provides both interpreters and listeners with the opportunity to experience a very special kind of meditation. The sound, that is born of silence and consists of one single tone, carries a great and ideal weight. In the Armenian language, the notion dam means “endless tone”. This dam is practised by folk musicians that play their wind instruments without respiratory pause. (…) The resonance of the dam results in the concentration of a certain attentiveness, of the listener’s feelings. He does not focus on the subject of music as such – the instrument, the form, the programme of an oeuvre, the virtuosity of a performance – but rather on the sound itself that introduces him to a very specific and special world. In such cases, the tone can be compared to an atom consisting of the smallest particles imaginable. Therefore, this one tone consists of a multitude of elements.

This is why the individual note in Terterian’s symphonies assumes the function of motif, of theme. The dam principle, which is at the origin of practically all of Terterian’s symphonies, is often linked to the timbre of folk instruments, as is the case in the seventh Symphony. Nevertheless, Terterian’s music does not contain any direct reference to national motifs or rhythms. It is rather an expression of Terterian’s own conduct, the expression of a typically Armenian world view and a contemplative, meditative musical concept.

Another point of departure for the structure of his work would be, in the words of the composer, the “vertical perspectives of mountain people”. Ever since his fourth Symphony, Terterian has shared the preference of his contemporaries Alfred Schnittke, Valentin Silvestrov and Gija Kancheli for the traditional cycle of a one-part composition where the dynamic and timbral contrasts are important. These brilliantly built sound structures are always monothematic and static, but rich in contrast : from absolute tranquillity to raging movement, from a single voice to several and even a multitude of voices, from silence to threatening tutti. The interpreters that act as co-authors experience a very special feeling of time and space. It is interesting to find that Terterian’s symphonies can vary greatly in length, depending on the way in which they are performed and also, according to the composer, depending to the musician’s ability to “hear a tone”. Terterian’s symphonies can, each in their own way, be interpreted as a ritual for orchestra. In this ritual, every detail may have a symbolic meaning – be it an interval, a timbre or a specific rhythm. This also goes for the electronic phonograms that feature in the last three Symphonies. Obviously, these phonograms are integrated with the rest of the orchestra. During one of his interviews, Terterian made a statement concerning the sixth Symphony, that also applies to the seventh and eighth Symphonies : “A phonogram is like a mirror image of the world. (…) In the beginning there is nothing which will not continue to exist afterwards. Let me explain : the world is mirrored both horizontally and vertically. There is nothing here on earth that is not mirrored up there. The phonogram plays an important role in this respect, especially with reference to the form of the hereafter. In other words : it is simultaneously here and there. (…). The voices are not mechanical, they are human voices and voices of nature. They can be perceived differently every time.”

With reference to the phonogram, the listener may be reminded of the term “Colour of Movement” (G. Ligeti), that creates an illusion of electronic sounds. With Terterian this illusion becomes reality. His last two Symphonies constitute a diptych. If the seventh Symphony (1987) constitutes an immediate premonition concerning the 1988 earthquake and the ongoing Caucasian war, then the eighth Symphony (1989) is a reverberation of these events, saturated with hopelessness. There is, however, no concrete programme. Both symphonies propose variations on that typical composer’s preoccupation, viz. the “eternal question”. This preoccupation also shapes the structure of the oeuvre : it represents a circular dramaturgical composition that forms the basis of the various refrains. The folk percussion instrument dap functions as a dam in the seventh Symphony through a solo that can be heard throughout the composition. The improvisation of the dap was also used for several phonograms and turns into a swift whirling motion. The sharp sound of the kettledrums at the start of the composition constitutes an important refrain that sounds like the harbinger of tragedy. The third refrain consists of the clear exclamation of the octaves produced by the orchestra’s various registers. These are foreboding voices that try to withstand an unrelenting fate. The closer the “epicentre” of the catastrophe, the more in vain these tries become. In spite of the threat, the general and overpowering culmination suddenly comes to an end with a loud creaking (the “phonogram of the creaking and groaning of a falling tree”, as it is called on the score).

The lonely solos by clarinet and saxophone sound like an echo (score : “play behind the stage”). While the omnipresent exclamations of the octaves remind us of Beethoven’s ninth, these solos are reminiscent of Shostakovich’ famous cryptogram D-ES-C-H (in this case ES-D-DES-H-C). Is this a mere coincidence or the continuation of a great European tradition, although Terterian’s Symphonies do not seem to be in keeping with this tradition? The improvising dap, that reappears here, provides a characteristic accompaniment of these very personal motifs before the œuvre concludes with a profound, eternal silence (“until all sound has died away” – remark on the score). “When I remain silent, I do so about something (…) Perhaps this is something that music could ever express. There is an absolute quality to the silence and the music strives for silence. It is filled with eternity and depth – like the universe, that does not recognize boundaries in either space or time.” The eighth Symphony, which is a coda of Terterian’s entire symphonic oeuvre, is the worldly embodiment of these thoughts. It is the most tragic of Terterian’s symphonies and it simultaneously carries the weight of the lament and of the funeral march. As compared to his other Symphonies, that start with a barely audible note (with the exception of the seventh, that starts with the heavy sound of the kettledrums), the eighth Symphony begins with the musical representation of the catastrophic climax (similar to the “phonogram of the creaking and groaning of a falling tree” in the seventh Symphony). As an immediate reaction, two female voices start singing a folkloristic lament. Terterian’s typical musical space is thus gradually filled with their soft, exhausted groans and sighs. Even the omnipresent dam is divided between several voices (I Violini divisi) and loses its semantic meaning as a symbol of eternity and “infinity”.

The “eternal ostinato” of the lament (S. Sawenko) comes to the fore with the desperate outcries of the wind instruments. At the end of the oeuvre, the briefly flickering series of overtones merely emphasizes a sad rigidity that appears insurmountable. This brilliant lament, and thereby Terterian’s whole symphonic oeuvre, ends with the fading sound of the large drums. “I will always remember Avet Terterian as the man whom I met in Berlin, shortly before his death. There was an air of doubtfulness and silence about him, like a floating overture without continuation. What I did not read in his face was the “coda”. The news of his untimely death reached me one week later. Since then, I have had an ambiguous feeling : on the one hand I cannot claim to know what was in his soul, but on the other hand, it is obvious that the missing coda has now been created in Terterian’s place. It is a gigantic coda indeed, and I would say that this coda is the entire body of his work, of which we can truthfully say the following : ‘It is completed’.” (Arvo Pärt).