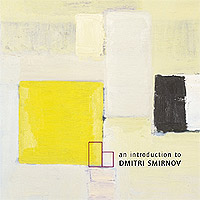 About DMITRI SMIRNOV
An Introduction To Dmitri Smirnov

was born in Minsk (Belorussia) on 2 November 1948, and entered the Moscow Conservatory in 1967 where he studied composition with Nikolaj Sidelnikov, instrumentation with Edison Denisov and musicology with Juri Kholopov. He was also tutored by the somewhat unorthodox Philipp Herchkovitch (1906-1989), a Jewish refugee who had been a pupil to Webern in Vienna. Smirnov found a job as an editor with the music publishing house Sovietskïj Kompozitor and composed some thirty oeuvres between 1973 and 1980. The majority of these are vocal compositions, written on texts by Isikava Takuboku, Alexander Blok, Michail Bulgakov, Kabajassi Issa, Pablo Neruda, Alexander Pushkin, Fjodor Tyutchev, Boris Pasternak, Arseni Tarkovski…

For Smirnov, music should unite the sonorous experience of the preceding eras without any prohibitions whatsoever on the subject of form or sonority. Nevertheless, he readily resorts to rational structures, to organised proportions that lend coherence to the expression without diminishing the intensity of a romanticism whose chosen affinity answers to the names of Blake, Hölderlin, Pushkin and Beethoven. He also remains loyal to his tutors and role models, in particular Edison Denisov and Alfred Schnittke to whom he dedicates three compositions included on this disc. The Trio # 1 for piano, op.23, (1977) is representative of the first period of his compositional career, a period that is marked mainly by the influence of Denisov and his attachment to an aesthetic with sonorous quality as its main concern.

The sound is a symbol of life with its three major stages: I. Adagio molto. Origin and birth of sound. II. Allegro. The sound becomes an allegory on life, active and multiple, sensitive and expressive. III. Lento. The aging and subsequent death of sound at the start of a thematic cell reminiscent of Dies Irae.

While the quartertones accompany the emergence of sounds that subsequently organise in a chromaticism that respects the tonal system, they make a comeback at the end, hereby marking the return of sound and life versus the informal fullness of silence. The Sonata for violoncello and piano, op.25, (1978) consists of one single movement. It is a rather concise piece that explores the extension of dodecaphony into the realm of quartertones by superimposing a series of twelve piano sounds on a series of 24 cello sounds. However, this initial hyperchromaticism is quickly tempered in order to make room for a great melodic expressiveness. This Sonata is dedicated to Russian cellist Vladimir Tonkha, one of the driving forces behind the modernisation of contemporary music in the former Soviet Union. The other works are some twenty years younger. In 1991, Smirnov and his wife, composer Elena Firsova, moved to Great Britain. It is there that he learned of the subsequent deaths of Edison Denisov (Paris, 24 November 1996) and Alfred Schnittke (Hamburg, 3 August 1998).

Elegy in Memory of Edison Denisov, op.97a, (1997) is written for cello and three crystal glasses but also exists in a version (op.97b) for sixteen instrumentalists, premiered by the French Ensemble Erwartung, managed by Denisov’s sonin- law Bernard Desgraupes. The two versions were performed simultaneously at the one-year anniversary of Denisov’s death, the former in Moscow, the latter in Paris. It is an emotional composition that frequently uses quartertones and pizzicato-effects reminiscent of a funeral bell. At the conclusion of the piece, the three crystal glasses announce Denisov’s name through various combinations of the notes E, D and S (Eflat).

Dedicated to the memory of Elena Firsova’s father, the famous atomic physicist Oleg Firsov, who died in 1998, Sonata # 3 for violin and piano, “es ist”, op.109, (1998), also exhibits an elegiac character that is most obvious in the initial Andante and the final Lento dolente, two movements that frame a brief scherzo (Presto) with trio (Burlesco). The title was taken from the choral “Es ist genug”, the last movement of the cantata BWV 60, O Ewigkeit, du Donnerwort by J.S.Bach. Indeed, the two elegiac movements commence on the introductory notes of Bach. Still, there are musical reasons for this choice. A few years earlier, Smirnov had harmonised the choral with the series of so called “completed chords” (the chords combined of all different unrepeated intervals) and the sonata reprises by expanding the original through a harmonic examination of the intervals.

Smirnov wrote Postlude in memory of Alfred Schnittke, op.112, (1998) for solo violin immediately after attending Schnittke’s funeral in Moscow. He systematically uses musical monograms, not only Schnittke’s monogram in the extreme passages but also those of some twenty composers who in his opinion were extremely important to Schnittke. He placed them at random in the following order: DSCH (Shostakovich), Bach, Weber, Wagner, Berg, Grieg, Mahler, Ives, Liszt, Cage, Stravinski, Varèse, Tchaikovsky, Haydn, Bartok, Brahms, Berio, Berlioz, Boulez, Beethoven. For this purpose, Smirnov extends the conventional musical alphabet by the doubling it with similarly sounding letters: c=k, d=t, e=i, f=v, etc. To this end, he introduces chromatic tones. C sharp corresponds to the letter l and r, F sharp to n and m, B flat to b and p, etc. Of course, this is a personal system that the composer had already applied with some earlier compositions. Sonata # 4 for piano “String of Destiny”, op.124, (2000) was written for Alissa Firsova, the composer’s daughter, who has interpreted the composition on several occasions. Even though this is a rather short sonata in one single movement, we can still distinguish four parts: Andante, Presto, Andantino, Con moto.

The dedication undoubtedly explains the juvenile character of this composition, whose first few pages are submerged in a sun-drenched echo of Scriabin’s piano.