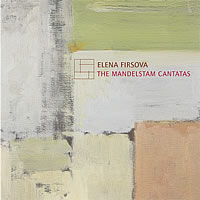 About ELENA FIRSOVA
The Mandelstam cantatas

Elena FIRSOVA : MANDELSTAM IN MUSIC My most important works are, for me, those, which set texts by Mandelstam. These include Three Poems by Mandelstam for soprano and piano and seven cantatas for solo voice and orchestra or chamber ensemble, Petrarch's Sonnets (in Mandelstam translations), Tristia, The Stone, Earthly life, Forest Walks, Silentium and Before the Thunderstorm. Mandelstam, especially early Mandelstam, is my favourite poet and the one to whom I feel closest. His influence is felt not only in those works, which set his words, but also in my music as a whole. His poetry is written in precisely the way I would like to write music. ELENA FIRSOVA

Born on 21 March 1950 in Leningrad, Elena Olegovna Firsova started to compose at the age of eleven, four years before she entered a music school. From 1970 she studied at the Moscow Conservatory with Nikolaï Rakov (orchestration) and Alexander Pirumov for composition and Yuri Kholopov for musicology. In 1972 she began work on a small opera The Feast during the plague from Pushkin. Chamber Music op. 9 for strings was followed in 1973 by a Cello Concerto op. 10, and in 1974 by a Second String Quartet op. 11, and a song cycle Autumn Songs op. 12, setting poems by Alexander Blok, Marina Tsvetaïeva, Boris Pasternak and Ossip Mandelstam. Having obtained her diploma in 1975, she took advanced classes with Edison Denisov and Philipp Hershkovitch, two representatives of modernity who played a decisive role with regard to her evolution in the midst of a Soviet Union fossilized by the cultural stagnation of the Brezhnev era. In March 1979 her Clarinet Sonata op. 16 and Petrarch Sonnets op. 17 (in translations by Mandelstam) were performed during a festival of contemporary Russian music organised by Cologne Radio. This first international success, in the company of six other composers including Edison Denisov and Sofia Gubaidulina, was violently denounced in November of that same year by Tikhon Khrennikov in front of the 713 participants of the sixth plenary congress of the Union of Soviet Composers, as these scores were thought to be insufficiently representative of Soviet realism and as such had been played without its authorisation. Fortunately times have changed, and these recriminations from the man who for forty-four years was to dominate the whole of Soviet musical life were never able to prevent Elena Firsova’s early works from being performed abroad. The Petrarch Sonnets, performed in Paris, Venice and London, revealed music of a modernism that was never aggressive or provocative, preferring sensitivity and elegance. Most of Firsova’s scores are short, rarely lasting longer than fifteen minutes or so, and the instrumental formations are of modest proportions, even in her concertos, which in fact are mostly entitled ‘chamber concertos’. Poetry, and that of Mandelstam in particular, plays an important role in her inspiration, not only in vocal works but even in instrumental pieces such as Postludium op. 18 (1977), the Chamber Concerto nº 2 for cello op. 26 (1982) and the Violin Concerto nº 2 op. 29 (1983). Mandelstam is a kind of alter ego for Firsova, as Tsvetaïeva is for Sofia Gubaidulina. His poems have been used in a dozen works, from the Three Poems for chorus op. 3 (1970) to the songs cycles Before the thunderstorm op. 70 (1992), Der geheime Pfad (The Secret Path) (1996) and Equinox op. 87 for chorus (1998). Most of these works are cantatas for the voice with a more or less extensive chamber ensemble (from four to ten instruments). Several were written for the Nash Ensemble of London. The first texts come from Mandelstam’s volumes The Stone (1913) and Tristia (1922), titles that are found in opp. 22 (1979) and 28 (1983), two song cycles that require a broader orchestral accompaniment. Mandelstam’s earliest poetry is particularly æsthetic, influenced by the ‘acmeism’ of Nikolaï Gumiliov (1886-1921) and Anna Akhmatova (1889-1966), to whom The Stone is dedicated. Dating from 1930-1934, the Moscow Poems more than once reveal a dramatic touch that prophetically evokes the fate awaiting the poet himself: arrested shortly after, Mandelstam was sentenced to three years internal exile, first in the Urals then in Voronezh, from which he returned with failing health. Arrested once more in May 1938, he died six months later in a camp in the environs of Vladivostok. The three cycles on this CD date from 1984 (Earthly Life op. 31), 1988 (Forest Walk op. 36) and 1994 (Before the Thunderstorm op. 70). The fact that the titles of these works sung in Russian are English stems from the fact that Elena Firsova’s works are published by Boosey & Hawkes in London and Schirmer in New York. The instrumental distribution is each time different, yet, apart from the strings (quartet or quintet with double bass), the main parts are for the flute, the clarinet and the harp. This sound spectrum is at times broadened by some subtle use of percussion. Mandelstam once called his poems “flashes of conscience in fainting days”, which is not without analogy in Elena Firsova’s fate, whose first creative period was spent during the ‘fainting’ culture of the Brezhnev era. Another image from the poet is no less prophetic in this regard: “I am a gardener in the world’s dungeon”. These cycles for voice and ensemble are among the finest scores of a genre that characterises the post-romantic music of the twentieth century and which is represented in particular by Benjamin Britten’s Illuminations and Serenade as well as by the song cycles of Dmitri Chostakovich such as the Fourteenth Symphony (1969) and the Six Poems of Marina Tsvetaïeva (1973) As part of this vocal tradition, which was contemporaneous with the period of her formation, Firsova allows the melodic line and the instrumental colour to match the metaphorical instant suggested by the words, a instant of happiness or of bitterness that leaves its mark on the surface of life: « Let the dregs of the instant settle Do not rub out the gentle mark » Elena Firsova is the wife of the composer Dmitri Smirnov. Since 1991 the couple have been living with their children in the UK in the midst of intense creative activity. Both of them have catalogues that contain more than one hundred opus numbers. Elena Firsova, in addition to her abundant vocal output, has composed around ten quartets and six chamber concerti, the fifth, for cello and orchestra, having been premiered in Kronberg by Karine Georgian on the occasion of Rostropovich’s seventieth birthday. The most recent largescale work of Elena Firsova, her opus 100 (2001) to be exact, is an oratorio for soprano, chorus and orchestra on the famous dramatic poem Requiem by Anna Akhmatova, who had previously inspired Boris Tishchenko in 1966 and John Tavener in 1980. FRANS C.LEMAIRE