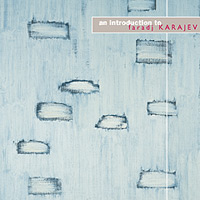 Born in Bakou on 19 December 1943. As implied by his family name, he is the son of Kara Karajev (1918-1982) who was a highly valued composer and pedagogue of the Soviet era. He divided his attention between Bakou and the oriental heritage of his country on the one hand, and Moscow's music life, which is punctuated with commemorative ceremonies, on the other. In June 1961, Kara Karajev is officially entrusted with the task of making the initial contact with Stravinski, which will eventually lead to the latter's 1962 visit to the USSR.

Although Faradj Karajev is a pupil of his father's, he enjoys an education which easily surpasses the boundaries of the traditional Soviet norm and ideology, as his father keeps his students abreast of musical evolution in the West. Among these students was a young pianist called Franghiz Ali-Zadeh, who propagated piano music from composers such as Messiaen, Xenakis, Cage and Crumb in his country. This was one of the advantages of being far from Moscow. In 1966, Faradj Karajev graduates as a composer with a piece for chamber orchestra, organ and percussion. This piece introduces one of the so-called "mougam"-modes. The eight "mougam"-modes belong to a tradition dating back to the Middle Ages and they determine the form and character of instrumental and vocal improvisations. A composition for ballet entitled Shadows of Kobystan bestows the young composer with a certain notoriety, thanks to a number of performances in Paris as part of the 1969 Dance Festival. This composition associates Azeri percussion instruments with the traditional symphonic orchestra. Neither this ballet, nor its 1970 successor (Kaleidoscope, written on themes by Scarlatti) give the slightest indication of the musician Faradj Karajev is to become. Without renouncing his country's traditional music patrimony, his intellectual interest is oriented towards the West and its contemporary developments: He feels especially drawn to Stravinski, Webern (in 1967, Karajev starts composing a Concerto Grosso in his memory), and Alban Berg (In Memoriam for string quartet, 1984).

Nevertheless, he is also susceptible to other cultural influences, as proven by his 1975 opera on Jean Anouihl's Eurydice (under the title The morning of the third day). In writing this score, he is initiated into the illumination of a completely different sonorous world, extricated from prevailing melodic and rhythmic forms and he penetrates a world of dreamlike and visionary oscillations. Conceived in this manner, his Sonata for two performers (two pianos, a prepared piano, the vibraphone, the bells and magnetic tape) constitutes a turning point in his instrumental writing. Continuing his research, Faradj Karajev becomes interested in poetry by various authors: René Char, Ungaretti, Nazim Hikmet, Carl Sandburg (an American poet who interpreted his ballads himself, in a way which reminds us of the mougam singers), E. Dickinson and W.C. Williams. These are all artists who have questioned the traditional forms of expression through concentration, fragmentation and pauses of such introspective depth as to flirt with esotericism. In 1978, his quest for the essential and the impalpable, for depth and mystery, leads him to compose a monodrama for soprano and chamber orchestra analogous to that of the Sonata, but enlarged with a jazz quartet and an accordion. The title Journey to love was taken from a series of poems by W.C. Williams, the texts from the various poets mentioned above. This inaugural journey to love, viz. communication, the bond, summarises the intimate musical approach of Faradj Karajev.

In 1980, Faradj Karajev and his father join forces in order to compose a symphony for choir and orchestra entitled The house of the deaf, written on texts by Goya. Kara Karajev dies 13 May 1982. This painful severance of a profound tie is reflected in a composition entitled Tristessa 1 (Farewell Symphony), and is dedicated to the man who was, at the same time, "a father, a tutor and a friend". Long murmurs that arise from a very complex instrumental profusion accompany a number of citations from Karajev's Preludes for piano. An analogous nostalgia can be found in two serenades written during the same period, but inspired by Mozart: I said good-bye to Mozart on Prague's bridge of Charles (1982) and the 1983 piece The year 1791 that dissolves Mozart's final measures (the beginning of the Lacrymosa, taken from the Requiem) in a renewed profusion of instruments. Even in the 80s, this type of music still runs counter to the official music imposed by Moscow, with all its consequences when it comes to extending visa to foreigners. This is why in 1983, a piece composed as ordered by the Festival of Zagreb (a kind of tragicomedy inspired by Samuel Beckett's Waiting for Godot) is cancelled just as the musicians are getting ready to leave Moscow.

Apart from Stravinski and Webern, John Cage and George Crumb also greatly influence Karajev's aesthetic and spiritual evolution. Karajev discovers that the attitude of these American composers is akin to that of his own culture: they regard music as a meeting place for emotional immersion in slow metamorphoses of sound and rhythm. Consequently, his 1985 tribute to George Crumb, entitled A crumb of music for George Crumb, does not come as a surprise. The symbolism is twofold, because the music is indeed "crumbled". Karajev applies a divisionist fragmentation which is thin at first sight but however imperceptible it may be, it is still based upon a fanatic writing of music , coupled with a sharp eye for detail. This is where Karajev clearly distinguishes himself from other composers such as Arvo Pärt or Gorecki, who aim at simplicity of expression through simplicity of form.

In 1986, the coming of perestroika opens many doors that had previously remained shut. Karajev successively composes Terminus (1987), a solo piece for cello, a Chamber Concerto for five musicians (1988), Alla nostalgia (1989), a tribute to film director André Tarkovski who died in 1986, Klänge einer traurigen Nacht (1989), the Postludes 1-2 (1990-91) and, finally, the 1993 piece Ist es Genug ?, written at the occasion of his fiftieth birthday. In fact, this enigmatic title conceals the fact that Karajev takes stock of his life in writing this composition. He does so with a touch of irony and he admits to being worried, as illustrated by the many auto-citations. This work is a commission by conductor Reinbert de Leeuw's Schönberg Ensemble. Karajev had previously made an orchestration of Scriabine's Sonata n°10 for the same ensemble.

Faradj Karajev's music is very closely linked with its composer, an educated man who is a sensitive prisoner of his own dissatisfaction in the face of the eternal dilemma of contemporary art: What else is there to say when all has been said ? With the past looming over their every move, composers such as Crumb or Karajev, but also the poets R. Char, Ungaretti, W.C. Williams), the film director (A. Tarkovski) and the painters (Goya, Monet, Chagall) he admires, try to capture the fragile sparkling of the last interstices. Consequently, their art is thin, volatile, devoid of all rationality and construction, art from the other side of the mirror. Each composition is nothing more than a bottle thrown into the uncertain ocean of communication and it belongs solely to he who, by opening the bottle, recognises the reflection of his own dreams in its subtle and unusual sonority.

Faradj Karajev composed three versions of the same Postlude, the third of which was written for two pianos with a double cast. It is not the complexity of the music but the thin and transparent sonorous execution which entails these differences in cast. Senza suono and Al niente are the most frequent indications on the score. The composition begins with the barely audible repetition of the same note: A. The repetition is frequently interrupted by long silences and the note grows louder with each passing octave. It is sustained in the harmonic resonance against a horizon of clusters and subsequently punctuated with ornamental motifs that are dominated by the fifths. The combination of all these elements makes for an atmosphere which is both serene and mysterious. This atmosphere is suddenly disrupted when the pianos burst into song (in Postlude 2, this song is performed by a string quartet which remains hidden from the audience). The composition ends in a flutter of fifths. In Postlude 2, this sparkling is prolonged by a swelling contrabass recitative.

…A crumb of music for George Crumb for Chamber Orchestra

Written for an ensemble of some fifteen musicians (one for each wood-wind instrument, brass instrument and string instrument and with two percussionists), this composition uses a text by the American female poet Emily Dickinson (1830-1886). The musicians pronounce the text at the beginning, accompanied by barely audible (Quasi niente) brass instruments, punctuated by the piano in the bass part:

If I couldn't thank you Being fast asleep You will know I'm trying With my granite lip !

The wood-winds burst into song, a kind of repeated hymn, with a dominant oboe. This mysterious and intimate music is an excellent illustration of Karajev's special talent for creating a sonorous universe which is simultaneously melancholy and magical. After a renewed outburst of song, the strings provide a contrapuntal reflection that accumulates the interstices between the parts in major and minor in a slow crescendo. The composition ends with a murmur of voices repeating "Robins come", while the brass section plays sustained notes, Al niente.

The cast is limited to nine musicians and a dozen instruments: two for the flute and the clarinet, two for the mandolin and the guitar, a harp player, a percussionist, a violinist, a viola player and a contrabass with five strings. The dreamlike and nocturnal music of the first movement contains more elements of Asian origin than the other scores on this record, but there is never any question of distinct folklorist references. We are dealing with gloomy murmurs emanating from the marimba, the clarinet and the heavy strings. The second part is dominated by the guitar and the mandolin and is set against the background of a Webernian light. The calmness is deceptive as the whole piece, measure for measure, is composed of alternations between accelerandi (Nervosamente) and the return to the initial tempo (Calmamente). The third movement follows immediately and begins with a long murmur of plucked instruments (the mandolin, the guitar, the harp against a background of contrabass). It seems as though the night has recovered its indistinct and almost serene darkness, but then the bass clarinet and the flute break the silence. They appear to announce the dawn through ornithological sounds. They cease their intervention, however, luring us into the nocturnal depths of a cosmic magma. The final movement is composed of alternations between the strident dialogue of the flute and the clarinet on the one hand, and the serene arpeggio of the vibraphone on the other. A brief coda by both guitars concludes this unusual encounter between darkness and light, hope and fear, disorder and beauty.