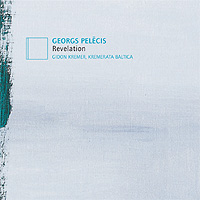 Georgs Pelecis is one of the most knowledgeable musical scholars in Latvia, especially in the fields of history and theory of counterpoint. The composer was born in Riga on June 18th 1947. He graduated from the Piotr Tchaikovsky State Conservatory in Moscow in Aram Khachaturjan’s composition class in 1970, and in 1977 he finished the music theory post-graduate course with Vladimir Protopopov. As of 1970, he has been a lecturer in the Music Theory Department at the then Latvian State Conservatory, now the Latvian Academy of Music. In 1990 he was elected to the position of professor. His main disciplines are counterpoint and fugue.

Georgs Pelecis’s work in the field of musicology is especially noteworthy. In 1991 he submitted his doctoral thesis on The Musical Forms of Jean de Ockenghem and the Traditions in the Low Countries Polyphonic School.

In the field of polyphony, he has contributed to more than 30 scientific works – both on the history of Western European music (Middle Ages, Renaissance, Baroque) and on the history of Latvian music – publications and international conferences in Riga, Moscow and Rome. His other main research subject, Palestrina’s Principles of Polyphony and Traditions of the Vocal Polyphonic Era (1990) is seen as a major contribution to the subject and was awarded a medal at the International Palestrina Centre of Rome in 1993. Georgs Pelecis was the first President of the Ancient Music Centre of Riga.

The composer has worked in a creative capacity at Oxford (1995, Corpus Christi College) and Cambridge (1997, Gonville and Caius College) Universities. Pelecis has also received compositional commissions from the United Kingdom. His symphonic music for the Roald Dahl story “Jack and the Beanstalk” was performed at the Royal Albert Hall in London. His works have been performed at the Alternativa festival in Moscow, and at the Lockenhaus festival in Austria. His concerto, Tomér (Nevertheless), was given a dance accompaniment by the ballet troupe Dance Alloy in Pittsburgh in 2000 under the direction of choreographer Mark Taylor.

The musical tonality of Georgs Pelecis seems to reflect an amazingly clear positive spirit. This very quality, whose genetic ancestry can be found partly in Renaissance and Baroque music and partly in the minimalist aesthetic, brings a spiritual strength to the composer’s creative output and brings to Latvian music a previously unknown fresh and pulsating activity. Of all the stylistic categorisations which the composer himself and musical critics have given to his works, the most precise would be “new consonant music”. Pelecis’s music, both naive and mysterious in style, also reveals his profound knowledge of the music of past cultures. As he himself says: “My musical language and my style of expression have been influenced by what I have learned and come to love in the music of the past; its melodies, its rhythms and its harmonies, which have evolved from the 14th Century to the present day through the German, Italian, English and French music of the 17th Century. The study of folklore has also deepened my understanding. I do not place great importance on the separation of “ancient” and “contemporary”. For me all great and irresistible music actually represents the glimmer of an ideal and conveys the psychological drama of the human spirit when confronted with this inaccessible ideal.”

Comments on the works in the programme by Georgs Pelecis

My music is an integral part of Latvian music, but it is atypical. It can be seen in the context of a trend which appeared in Belgium in the 20th Century, called “new consonant music”. I invite my listeners to be aware that the evolution of music has not only been a progression, but also a long sequence of losses. These losses are painful to me and I cannot reconcile myself to them. I try to save and regenerate as much as I can. For the average listener, as indeed for me, the scope of classical music (from Monteverdi to Mahler) is a paradise that invites us into the most sumptuous realms that the mind of a composer can imagine. The imagination of a composer contemplates and rejoices in a certain ideal, that of sonic perfection in all its dimensions. But what has chased composers from this Garden of Eden? I rather fear that they have often escaped from their own master. As for me, no one has chased me out. So I remain there and I am happy. I see myself as a gardener, part guardian and part creator of the beauty in our communal musical paradise.

One of the fundamental characteristics of my style rests in the principle of the concerto. It can be clearly heard, for example, in “Buena Riga” which, through the unifying theme of a tango, brings together the melodies of Buenos Aires (Astor Piazzolla) and Riga (Oskar Strock) in a kind of dream in the form of a fantasy. The principle of the concerto is even more evident in “Nevertheless”. Moreover, this double concerto for violin, piano and strings reveals the importance of the psychological dimension in music. At the beginning of this piece, the piano plays in a minor key, in a state of permanent melancholy. The violin on the other hand, almost always in a major key, swims in happiness and wants to convince his partner to join him there. For a long time he doesn’t manage it, and it is only after three violin solos, three passionate cadences, that the piano finally says “yes”. Because true happiness is happiness shared! This work was performed in its ballet version on three occasions, in Riga, Pittsburgh and San Francisco. “Revelation” presents three soloists – a countertenor, a pianist and a trumpet-player – refusing to accept the familiar dreadful prophesies, preferring the promises of a realm of light and joy in the New Jerusalem. The theme is divided into three parts: The last lines of the Revelation of Saint John, Gloria in Exelsis Deo and Hallelujah. In Paradise everything happens for the first time but nothing happens for the last time. However, before entering Paradise, every one of us experiences a particular feeling when we do something for the last time: a last kiss, the last journey, the last song… (“The last song”).