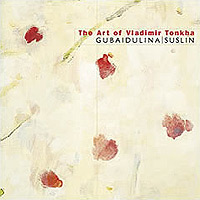 About GUBAIDULINA / SUSLIN
The Art of Vladimir Tonkha

Viktor Suslin was born on 13th June 1942. He belongs to a generation of Russian composers which, as a result of the Second World War, forms a rather small group. Although it has much in common with the pre-war generation (Pärt, Gubaidulina, Schnittke, Denisov), there are important and obvious differences. For example, the atmosphere at the conservatories in the first half of the 1960s was quite different to that which prevailed a decade earlier; whereas it would be true to say that the ‘thaw’ initiated by Krushchev was both uncertain and deceptive, it nonetheless led to a flowering of the arts and a greater open-mindedness in cultural life. Composers born in the 1930s, such as Volkonsky, Denisov. Silvestrov, Gubaidulina and Schnittke profited more from the thaw than those who were about ten years younger. The former group, who were at the time about 30 were able to secure performances of their first important works, and to make a name for themselves abroad.

In this respect life was more difficult for Suslin and his generation. On the one hand he was fortunate enough to have had excellent teachers – he studied composition with Nikolai Peyko, who had previously taught Sofia Gubaidulina, and piano with the distinguished pianist Anatoly Vedernikov. On the other hand his career as a composer began at the very moment when the political and cultural ‘thaw’ was abruptly terminated by Brezhnev in October 1964. The consequences of this soon became apparent. For example, it proved impossible to obtain an orchestra for his graduation exercise, the Piano Concerto (1966). Music of this kind suddenly began to be frowned upon. Subsequently, in the 1960s and 1970s, many planned performances of New Music were banned. This policy was applied to Suslin’s works just as much as to those of his senior colleagues, and in the end he decided to emigrate. Suslin’s character is Iyrical by nature, and not dramatic. His music avoids coarse contrasts and cheap dramaturgical effects and, although most of his works have a programmatic title, he rejects the use of literary models and what might be called ‘musical journalism’. For this reason his music does not fit in with the tradition established by Shostakovich. Although Suslin does not have an unduly long list of works to his credit, his music is characterized by its diversity. He never repeats himself and, in terms of compositional technique, is quite clearly concerned to impart individuality to each new work. His broadlybased expressive range stretches from ecstatic warmth to fervent meditation and Iyricism, and from wit and humour, to works with mystical and magical qualities. Suslin has never made specific use of texts from the Liturgy, although some of his pieces have religious connotations.

In his early works Suslin developed a language that is very much his own. He rejected minimalism and the use of polystylistics, basing his music instead on pluralistic material, and not on stylistic pluralism. Perfect consonances coexist with twelve-note complexes, which can be coloured in a large variety of ways, controlled aleatory techniques, microtones which result in a ‘non-Euclidean’ modality, unvarying and selfcontained symmetrical rows with the smallest possible number of intervals. Suslin fails to draw a clear distinction between his chamber music and symphonic works. He likes to join several movements into a single unit, and is not particularly drawn to sonata form.When devising his clear musical structures he sometimes relies on Oriental concepts of form, though this is something the listener would not generally notice.

Suslin also believes that timbre and colour are important structural elements. In this respect his lengthy collaboration with the composers Sofia Gubaidulina and Vyacheslav Artyomov in the ‘Astreya’ improvisation ensemble founded in 1975 was of special significance: for a number of years it gave Suslin the chance to become acquainted with a large number of standard and exotic instruments. Suslin’s works continue to be played in many different countries. Since 1979 they have been performed at contemporary music festivals throughout Europe and in Japan, partly thanks to the ardent support of eminent musicians such as Kremer, Geringas, Ljubimow, Grindenko,Toncha, Pekarski and Herz. Suslin has also directed radio workshops and given masterclasses. Jürgen Köchel

“Chanson contre raison” (“Song against Reason”) Is the title of a French love song dating back to the days of Guillaume de Machaut. It appeared so symbolic to me that I could not resist the temptation of starting some rumours. However, this motto also entails commitment and rules out every possibility of ‘science-oriented’ rationality.

This piece is in fact a kind of ‘Mephisto waltz’, marked by the appropriate compositional consequences. One of the purely instrumental aspects, too, is quite remarkable : two thirds of the oeuvre are played Scordatura (H1 instead of C). This fundamentally changes the disposition of the flageolet, the acoustics of the instrument and the timbre of the C-string. The return to normal (Scordatura H1 in C) during the performance occurs roughly where the golden section would be. The two episodes, the one in normal and the one in changed tune, compare more or less in the same way as dissonance and consonance; the changed acoustics of the instrument dissolve into the normal acoustics of the second episode.

The piece is dedicated to Gunter Ribke, who was also the first to perform it in Lübeck on 5 October 1984. Viktor Suslin

Madrigal for two cellos [1998] This work was composed in February 1998 and was conceived as a personal birthday present for two exceptional musicians who are very dear to me : Hyung-Jung Sung and Julius Berger. Writing for two musicians of this calibre is very exciting. It is not every day that a composer succeeds in writing a musical piece that unites two people who were born to two completely different cultures and whose birthplaces are so far apart. In my work I attempt to vanquish purely musical dissimilarities, a process requiring the two halves of the duo to make their way toward each other until they finally meet. I do not want to expand too much on the subject : even the most sharp-witted comments are useless if one does not hear what is in the music. I would just like to say the following : the tuning plays a very important role in this composition, not only in the metaphorical sense of the word, but in the literal sense in particular.This means that the difference between “D sharp and “E flat” or, more precisely, between the natural micro-interval and the chromatic quartertone should be as clearly audible as possible. I hope that “Madrigal” will prove to be more than just a composition written for a special occasion. Madrigal differs somewhat from my usual work and I tried some new things with this composition. Viktor Suslin

Sofia Gubaidulina Sofia Gubaidulina was born in Chistopol in the Tatar Republic in 1931. She studied the piano (with Grigory Kogan) and composition, and graduated from the Kazan Conservatory in 1954. Until 1959 she studied composition at the Moscow Conservatory with Nikolai Peiko, Shostakovich’s assistant, and then did postgraduate work under Vissarion Shebalin. She has been active as a composer since 1963. In 1975, together with Viktor Suslin and Vyacheslav Artyomov, she founded the ‘Astreya’ Ensemble, which specialized in improvising on rare Russian, Caucasian, Central Asian and East Asian folk and ritual instruments. These hitherto unknown sounds and timbres and ways of experiencing musical time had a profound influence on her creative work. Since the early 1980s, and especially as a result of the support and encouragement given to her by Gidon Kremer, her works have been performed widely in western countries.With Schnittke, Denisov and Silvestrov, she is now seen to be one of the leading representatives of the New Music in the former Soviet Union. A striking feature of Gubaidulina’s work is the almost total absence of ‘absolute’ music.The vast majority of her pieces have an extra-musical dimension, e.g. a poem, either set to music or hidden between the lines, a ritual, or some kind of instrumental ‘action’. Some of her compositions demonstrate her preoccupation with mystical ideas and Christian symbolism. Sofia Gubaidulina is a member of the Akademie der Künste in Berlin, of the Freie Akademie der Künste in Hamburg, of the Royal Music Academy in Stockholm and of the German order “Pour le mérite”. In 1992 Gubaidulina moved to Germany, and now lives near Hamburg.

Quaternion This work was composed in 1996 and is dedicated to the Moscow cellist Vladimir Tonkha, founder of a uniquely professional quartet consisting of four cellists. The title “Quaternion” resembles the more customary designation “Quartet,” but there is a difference. By using this term I want to particularly emphasise the unity of the four-member ensemble, consisting as it does of four identical instruments. The instrument seems to be “one,” yet is divided into four as well. The term “quaternion” is a mathematical one. In the middle of the previous century, U. R. Hamilton used it to designate the “four-one” numbers consisting of one real and three “imaginary” components. In this way I could imagine a metaphor: on the one hand, the actual pitches played arco or pizzicato, on the other, various states of tonal indefiniteness (ricochet with the wood of the bow, playing with the fingers on the strings, playing with thimbles on the strings, different types of glissando and, finally, in the coda, playing with the bow on the fingerboard). The principal theme is the “drama” of tones expanding by quarter-tone steps. A dramatic development, as it were, arises in response to this expansion; this development peaks in the unification of all four instruments into one single sound (the bows playing on the fingerboards). The sound is not precisely definable. It is somehow present, and, at the same time, not really there. Sofia Gubaidulina (Translation: David Babcock)

Ten Preludes for Violoncello Solo In the early 1970s a professor at the Novosibirsk Conservatory requested that I compose cello etudes for a collection of tutorial pieces that he was to edit. This seemed like a very interesting task to me although I knew that what I composed would hardly be printed. So I wrote simply “for myself.” As expected, my work did not appeal to the professor, and so he did not take anything of what I had written into consideration for his collection. (Later on,my work was in fact published by “Sovietski Kompozitor” in Moscow – but the professor was no longer involved in this undertaking.) My work remained unnoticed for a long time until two first class Moscow cellists, Ivan Monighetti and Vladimir Tonkha, got hold of the score. Each musician played the composition not only perfectly, but also truly made it his “own” work in every sense of the word.The last prelude of the cycle (“Senza arco – senza pizzicato”) especially offers the performers the chance to make the work his or her “own.” Here, improvisatory sections break through the composed score; each player can interpret them in different ways. My express intention was to recognise how music’s content can change according to the instrumentalist’s creative imagination. Vladimir Tonkha, who gave the world premiere of these miniatures in December 1977, impressed listeners with his truly ingenious imagination. Thus the music gained an absolutely unexpected significance for me as well as a special metaphysical meaning. That is why the ending of this piece belongs entirely to him. I interpret the word “etude” to mean an artistic sketch, and, in the present case, sketches of various methods of sound formation. After much discussion, Vladimir Tonkha and I reached the conclusion that the work should not be called “Etudes,” but rather “Preludes” for violoncello solo, since the term “Etudes” only partially applied to the work’s content. Since Vladimir Tonkha was not only the “godfather” of the Preludes but also the editor of the printed edition, this work has been dedicated to him. Sofia Gubaidulina (Translation: David Babcock)