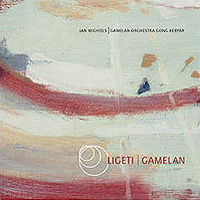 With reference to his ‘Etudes pour piano’, a work in progress since 1985, composer György Ligeti states : “They behave as growing organisms”. These compositions open up new horizons as they are the product of various spheres of influence. Cases in point would be the work of Frédéric Chopin and Claude Debussy, Conlon Nancarrow’s player piano, geometry as perceived by Benoït Mandelbrot and Heinz-Otto Peitgen, improvisations by Thelonious Monk and Bill Evans, Balcan music, Central African polyphony and the Balinese gamelan ensembles.

The latter consist of a number of metallophones, drums, cymbals, bamboo flutes and gongs that combine to create extremely differentiated polyrhythmic structures. The ritual aspect – the battle between good and evil, white and black magic – is also one of the pillars of Balinese music. Several examples by the Gong Kebyar ensemble are included on this disc. The vocal ‘Kecha-choir’ also uses a technique widespread in Europe during the Middle Ages : the hocket (a technique in which two or more voices fill in one another’s silences to make a composite melody). What does Ligeti really mean by ‘Galamb Borong’ ? At any rate, there is no litteral meaning : these two words have no meaning in the Indonesian language, it is simply how they ‘sound’. The composer says that you are listening to music from an imaginary island not to be found on any map. However, the major feat in this miniature is the creation of an almost pentatonic Indonesian slendro-atmosphere through the expert combination of two different structures of the European ‘moderate’ keyboard, which is democratically subdivided into twelve semitones. Fèm (the actual Hungarian word for ‘metal’) presents metallophones, while ‘Vertige’ progresses at the speed of light and literally freezes time as it comes ‘crashing down’. The humour of both ‘Der Zauberlehrling’ and the poetry of ‘En suspens’ (dedicated to his friend and colleaguemaster György Kurtag) is geared to the possibilities of polyrhythmic techniques. ‘Entrelacs’ — based on the time-honoured ratios of the Golden Section – momentarily harks back to the ‘distorted’ diatonic system of ‘Galamb Borong’. However, Ligeti pulls out all the stops for ‘L’escalier du diable’ : the result is a hallucinatory black fresco. The title of the last étude — the ‘endless column’, after a sculpture by Constantin Brancusi — could make a nice metaphor for the incredible fantasy that the Hungarian wizard is able to display when he places his ten fingers on a keyboard.

Ligeti had always dreamt of being a great pianist : this goal he never achieved, despite his profound knowledge of the instrument and his passion for the piano repertoire. By his own account, he undertook these études to transform his own pianistic inability into a professionalism of extreme virtuosity – with a wink at the difficulties concerning perspective with the great painter Cézanne, just like Maurits Escher’s impossible perspective is a beautiful metaphor for many of the compositions of the cosmopolitan Hungarian composer. A major enemy of ideologies and systems, he fled Hungary in 1956. He has forged ahead ever since, ‘searching like a blind man in a labyrinth’. He compares the role of the modern composer with the contents of a bubble : physically very small and vulnerable but of infinitely flexible spiritual proportions. This comparison probably also holds true for the position of art in our Western society : the ties with the ritual – the primary pulse of our existence – has been severed almost completely. The music that is characteristic of Balinese culture is inextricably bound with the everyday life of the Balinese. The most striking combination on this disc is not a lucrative, trendy crossover : all that glitters is not (dollar) gold. On this disc, you will hear only a fraction of the cultural diversity that surrounds us. The clash between these two worlds reveals a great deal about ourselves and our culture. Is it possible that this creates a fraction of a ritual – as a growing organism ?