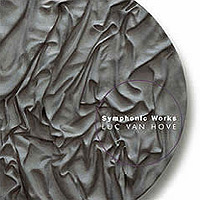 Compositions for Symphonic Orchestra In 1985, Luc Van Hove was commissioned to write a composition for symphonic orchestra as part of a retrospective dedicated to Ostend painter James Ensor. During his search for a source of inspiration for what would be his first major composition for orchestra, his eye fell on Ensor’s small impressionist painting Carnaval sur la plage (Carnival at the Beach). The static quality of the painting, the cursory pencil strokes, the shade of colours, the enormous density and the contrast between the abstract and the figurative are all characteristics that can also be found in Van Hove’s composition Carnaval op het strand. The tremolo passages, the harmonies, the obstinate figures that appear as loops and the reoccurring untransposed musical motifs all lend the composition a fascinating immobility. According to the composer the work was written “from the viewpoint of a man looking out to the sea; it is purely introspective music, a great stagnation, as if everything that wants to move is being held in a firm grip. The whole event appears to be encapsulated between the prologue and the epilogue”. The contrast between the abstract and the figurative is mirrored by the division into two musical categories. Against a background of a slowly progressing “abstract” sound structure, which Van Hove describes as “the music of the sea”, terse and recognisable musical figures appear that represent the carnivalesque characters. For the most part, these characters are restricted to succinct melodic impulses that only rarely come to the fore. “The carnivalesque is trapped inside the harmony, if you will”. It is only towards the end, during a climax punctuated by percussion, that the figures finally rise to the surface. During the epilogue, the carnivalesque fades into the background until only a lonely xylophone remains.

Whereas certain passages in Carnaval op het strand were marked by a quasi-impressionist atmospheric character, the Symphony N° 1 op. 2 (1989) witnesses the arrival of an explicit rhythmic presence. A couple of years earlier, the composer had taken a summer course at the famous International Workshop for Professional Choreographers and Composers at the university of Surrey in Guildford, England. This course was to prove a crucial step in his development as a composer, as it aroused within him a great interest in the parameters rhythm and movement, having an immediate impact on Van Hove’s style. Two textbook examples in this respect would be the chamber music compositions the Three Guildford Dances op. 19 (1986) and the Septet op. 24 (1988). This tendency is also obvious in the Symphony N° 1, especially in the third part Flood with its virtually uninterrupted rhythmic propulsion and its differentiated use of the percussion section. Originally entitled Orkestwerk (Work for Orchestra), this symphony is also the first composition for orchestra in which the composer consciously strives after a symbiosis of the tonal and atonal sound universe – an ambitious project that would also set the tone for his compositions of the nineties. In this work the desire to blend the tonal music tradition – and primarily the style of the romantic period that constitutes Van Hove’s roots – with a contemporary style is expressed through the insertion of recognisable quotes.

The second part of the symphony, that bears the telling title Mahler, paraphrases a complete passage from Mahler’s Fourth Symphony, viz. the slow third part Ruhevoll, Poco adagio. This is clearly indicated on the score through the reference “like the fourth symphony of Mahler” and through Mahler’s musical notation “Nicht schleppen”.More general tonal references also come into play, for example the prolonged pedal notes in the first part Licht. These pedal notes form quasitonal prefect-fifth progressions.

The integration of tonalising elements in an atonal context continues in Stacked Time op. 26 (1990), a concerto for electric guitar and orchestra, even though in this particular instance the tendency is inherent to the nature of the commission: at the occasion of its fiftieth anniversary, the organization Jeugd en Muziek (Youth and Music) asked Van Hove to write a composition that would bridge the existing gap between pop music and classical music. The romantic world of the First Symphony is still present – witness the title of the second movement Träumerei – but elements from the world of light music are now added to the mix. Indeed, Mahler himself was no stranger to such flirtations with the trivial. Specific references to popular music surface amongst others in the guitar solo of the first part and in the sometimes “rockish”, percussive style of play.The conclusion of the first part can undoubtedly be seen as an ironic wink.A sustained final G major chord is “beaten” “sffff per tutti”, as is prescribed by the stereotypical pattern of a pop concert.The first movement was named IV-V-I after the tonal chord progression which, for decades, has been used as a foundation for countless pop songs. Pop music continuously repeats such harmonic functions but this is not the case with Van Hove. Quite the opposite: he superimposes them and combines them in various complex ways.

The slow middle part Träumerei sings a different tune. Slow broken guitar chords dialogue with the woodwinds that appear to glide into the texture from out of nowhere. The tonalising tendencies from part one resurface here. The slow arpeggio guitar chords are not only a specific accentuation of the basic “pitch collections” of the composition. Quite often they can also be interpreted as expansions of triads and of minor and dominant seventh chords.What is more, the entire part consists of one prolonged quasi-tonal cadence in the bass parts, concluded with an undisguised triad in D major, the quasi-dominant of the two encompassing movements.

An extremely clenched density marks the apparently rhapsodic and overwhelming final part Haste. Evidently, the title Stacked Time not only relates to the accumulation of different chords or harmonic functions, but also to the superimposition of various textures and thematic ideas. The emancipation of the rhythm that was introduced in the third part of the First Symphony is elaborated in this composition, amongst others in the affirmative use of the percussion instruments and in the syncopation of the brass instruments’ chords. The Festival of Antwerp 93, Cultural Capital of Europe commissioned the Oboe Concerto op. 29 (1993). The concerto was later renamed Triptiek (Triptych) because of the architectural floor plan of the musical form. Two outer movements, conceived respectively as an introduction and an epilogue, act as small side compartments to the central part of the composition, which Van Hove calls “the actual musical happening”. The side compartments distinguish themselves by their slow pace and modest contemplative character and provide a number of elements that are integrated in the centre part.The “direct, spontaneous expression” occupies centre stage in the oboe concerto, even more so than in Van Hove’s other orchestral compositions. We might say that the immediate expression coincides perfectly with the musical form. Naturally, there is a direct link between the explicitly melodic character of the composition and the intrinsic qualities of the oboe as a purely melodic instrument. Whereas the melodies in earlier orchestral compositions often presented themselves under a succinct and condensed form,the composer now delineates a monologue of drawn-out melodic phrases. Nevertheless, the soloist’s monologue is almost completely embedded in the orchestral texture. Constant vigilance on behalf of the executants and the conductor is therefore required in order to preserve the balance between soloist and orchestra in the total sound structure.

A similar approach can be found in the two-piece Piano Concerto op. 32 (1995). One of the composer’s main goals was the elaboration of a captivating melodic style of composing that would enable the part for solo piano to help support the rhythmic, metrical and harmonic structure of the whole without lapsing into typical piano concerto clichés or virtuoso passages. The piano part constantly changes course within a freely evolving metre that flows naturally from the melodic lines and the chord changes, but it is nevertheless notated with complex and rapidly changing time signatures. The rhythmically complex solo part constantly counterpoints the broad and sedate movement of the orchestra. Consequently, one of the soloist’s major tasks is the integration of the piano’s phrases in the broad movement of the orchestra. Both parts, Dance Tunes and A Story, are structurally related because of their shared collection of tones, even though they are fundamentally different in character. The opening part Dance Tunes could almost be considered chamber music and unfolds gradually, its point of departure being a phrase for solo piano. Dance Tunes is constructed around one central musical idea and creates a slow, intimate and almost ethereal atmosphere. The melodic passage of the piano, enriched from time to time with a gracious waltz rhythm – a “dance tune” – is accompanied by a mostly consonant interpretation of the selected tone collection.This first movement acts as a prelude and, according to the composer, it comments in advance on the second part. This second part is a more substantial movement, involving the whole orchestra.The fact that this second part bears the title A Story not so much denotes an underlying program as it points out the importance of the narrative aspect – an aspect that occupies a major importance in Van Hove’s oeuvre and is expressed again and again in his partiality for large musical phrasing, a closed form and in his consistent avoidance of fragmented composing.

The melodic character of both the oboe and the piano concertos is elaborated even further in the Symphony N°2 op. 34 (1997).The main melodies and the subordinate melodic lines are interwoven in order to create a complex fabric.This is especially the case in the first part Elegia. The ideas that are put forward in this subtle interplay of musical lines are subject to constant development, so that the whole gives the impression of a continuous current.The rational organisation of the chromatic scale is even more extreme on the Symphony N°2 than it is on Van Hove’s earlier compositions. The composer uses an even stricter network of structurally related tone groups. However, this rigorous construction in no way interferes with the expressive power of the composition. On the contrary, of all the compositions on this CD, the Second Symphony is probably the one with the largest emotional power. The elegiac nature of this composition, which Van Hove associates with the dejected mood that was prevalent in the Belgium of 1996, contrasts sharply with the virtuoso, vivacious musical joy that is so typical of so many of his other orchestral compositions.