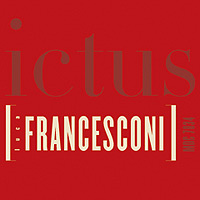 LUCA FRANCESCONI was born in Milan in 1956. He studied with K. Stockhausen and L. Berio. His work comprises more than fifty compositions for the very best soloists and formations such as the Arditti Quartet, the Ensemble InterContemporain, the London Sinfonietta, the Ensemble Contrechamps, the Ensemble Modern … His compositions have been among the winners at numerous festivals, such as the Venice Biennale, Ars Musica in Brussels, Musica in Strasbourg, Akiyoshidai in Japan, Archipel in Geneva, … and have won various prizes ; the Gaudeamus-prize in 1984, the Kranichsteiner Music Prize at the 1990 Darmstadt festival, the Siemens-prize and the prix Italia in 1994 to name but a few.

Francesconi has more than just one string on his bow : he teaches composition at the Milan Conservatoire, he has established a studio for electro-acoustic music (the AGON-studio) and he frequently conducts orchestras during executions of his own compositions. In 1996, he wrok a video-opera where the music is accompanied by footage coming from the Studio Azurro and he is currently writing an opera. Commissioned by the Monnaie in Brussels, the work is based on Samuel Taylor Coleridge’s “The Rime of the Ancient Mariner”.

Encore / Da capo Encore / Da capo is a composition for flute, clarinet, bass clarinet, vibraphone, piano, synthesizer and a string trio. The composer elucidates : “This piece attempts to render a transformation process dominated by one formal stroke of the bow as clearly as possible, as perceptible as a stroke of the painter's brush. Rather than speaking of development, it would seem more appropriate to designate this process as an almost physiological transformation. The sole purpose of the opening is to represent a pure state of energy, a rhythm waiting to be created. This energy unfolds, it evolves gradually from the inarticulate into the articulate. Consequently, it peters and fades into the distance, into a great rallentando in space and time. Encore/Da Capo is dedicated to the Ictus Ensemble.”

Mambo Mambo is a great virtuoso cadence that commences with "Islands", a concerto written for piano and chamber orchestra. The composition is based on a polyrhythm by jazz pianist Lennie Tristano and seeks to preserve the somewhat brutal swing that characterizes the original work. The texture of the piece consists of three more or less repetitional layers that generate the dynamics of the piece through their mutual rivalry. The first of these layers is a bass ostinato (itself consisting of a fusion of various asymmetrical rhythms) which, at first, demonstrates a "riddled" character. It is interspersed with silences prior to becoming the cornerstone of the entire piece. The second layer consists of a simple ascending and descending scale that progressively invades the first part of the oeuvre until it creates a sensation of veritable "bebop-vertigo". It is at this precise moment that the third layer comes into play : a diatonic figure of chords played staccato. This new material, that superimposes itself on the first two layers, introduces the kind of challenge with reference to composing for piano that Ligeti so thoroughly enjoyed in his Etudes : to establish a polyphony on three levels, each of these levels functioning independently from the others on a stylistic and rhythmic level (ideally, a polyphony for three musicians), while respecting the boundaries of human virtuosity.

Attesa Attesa exists in two versions : on the one hand as a quintet for acoustic wind instruments and as a quintet for amplified wind instruments that are subdivided into a quadrophony on the other hand (the latter version is called "Attesa nello Spazio"). We are proposing an intermediary version, deliberately mixed in an artificial way, taking advantage of the stereo effect and of the sudden changes in reverberation. The intention of the oeuvre lies in the dialectic of two bars : a dynamic bar and a static one. "Dynamic" applies to the bar or "time" of development, the time of transformation of the material and the irreversible nature of the process. To put it briefly : it is the time or rhythm of classical music. We will discover it during the "solo" episodes of the oeuvre. In a way, Francesconi associates the static time with all that is elsewhere : the oriental time and the time of myths. Strangely enough, this delayed time is best expressed through a high pace of execution, in order to give the listener the impression of traveling on the inside of a spiral, where a sense of dizziness or rotation is created. We will discern this effect during the "tutti" episodes of the oeuvre. Francesconi discusses these two interwoven worldly thoughts as "a polyphony of codes", a utopia which he contrasts with "the potential nightmare of the flood of superimposed discourse with which our existence is interspersed".

Charlie Chan “This piece was written in March 1990, in the attic of Esther, Hans and Charlie Chan in Amsterdam. The piece is dedicated to them. On that particular night, I did not have a place to bed down and Esther – who did not know me at all – welcomed me into her family ; I slept beside her child. I also learned that night that Charlie Chan was Charlie Parker’s nickname.” l.f.

Plot in fiction Plot in fiction is written for solo aboe (alternating with English horn), flute, clarinet, bassoon, horn, piano and a string quintet. The composer explains : “Why Plot in Fiction ? Plot means weaving or thread, but also designates a conspiracy and collusion. In the theatre, as a matter of fact, the "plot" is the intrigue, the narrative thread of the story. In this case, the intrigue involves a false pretence, viz. a linguistic fabrication. (…) The story the music has to tell surges forward and just as the air we breathe is indispensable, so is the invention of narrative threads. We need to recompose an interior unit within our work that possesses the ability to speak, to convey a message. Our jungle of daily symbols is extremely complex, rich and stimulating ; it is also chaotic and terrifying ; nevertheless, the thread does exist. Let us consolidate it, or else let us invent it : proposing a thread is of vital importance.”

Ictus is an ensemble for contemporary music based in Brussels, in the building of the Rosas dance company. The ensemble consists of musicians whose point of departure deals with conflicting feelings towards modern music that is typical of their generation : a priori they feel sympathy toward novelty, combined with antipathy towards “avant-garde” for the sake of avant garde; they will seek to discover other cultural fields of interest (rock, cinema, theatre) but they distrust syncretism ; they are earnest and ironic ; etc.

This is clearly reflected in their programming, which covers a very wide spectrum of styles. In order to counterbalance this eclecticism, to put themselves on the line with every performance and in order to turn each concert into a moment structured in time, Ictus favours concerts organized around a central theme (fragmented time, concise forms, the nocturnal world, irony, the repercussions of popular music…). They also give portrait-concerts (Magnus Lindberg, Luca Francesconi, Emmanuel Nunes, Steve Reich, Toshio Hosokawa,…).

In collaboration with the Brussels Philharmonic Society, Ictus proposes between six and ten intra muros concerts that are always met with great enthusiasm. As a matter of fact, in three seasons’ time (1994-1998) Ictus has established a name for itself on the international music scene. The ensemble has already performed or will shortly be performing at the following festivals : the festivals of Utrecht, Montreal, Ars Musica in Brussels, Vienna, Tokyo, Ircam in Paris, the Strasbourg Musica Festival, Octobre en Normandie, the festivals of Donaueschingen, Helsinki, Royaumont, Freiburg, the Bartok Seminar in Szombathely, the Wittener Musiktage, the Festival d’Automne in Paris, the Berliner Festwoche, …