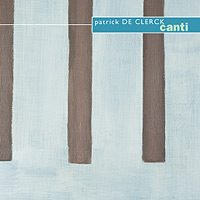 Three of De Clerck's recent compositions (Trio for strings, Quintet with piano and Quartet 'Spheres'), covering the period from 1990 to 1993, became available on CD in 1995 (Megadisc MDC 7866). Chamber music, even if it is contemporary (insofar as they relinquish the power to turn the musicians into acrobats of the unusual), is often the enigmatic receptacle for essential messages. Nevertheless, no matter what expressive intentions the composer wishes to convey through a particular score, the listener will often wonder as to its precise meaning. This conjecture becomes less distinct when the composer who forsakes the semantic silences of pure music, is interested in the kind of music a poet will produce on a syntactical level. This reconciliation between verb and sound, text and hymn, poetry and music, can sometimes shed new light on instrumental compositions by making them relinquish their ambiguous status of "pure music". This is unquestionably the case with the fifteen quartets by Schubert or Chostakovitch: the Winterreise determines our understanding of Schubert's last quartets, in the same way the cycles of melodies by Alexander Blok, Marina Tsvetayeva or Michelangelo bestow their full meaning upon Chostakovitch' last quartets and sonatas. These references are far from coincidental since Russian poets Fiodor Sologub and Anna Akhmatova (together with Michelangelo) are the genesis for the Patrick De Clerck's vocal work which is to be found on this CD.

For the unknown friend

At the end of his Kinderscenen, Schumann said that the poet speaks. But for whom does he speak ? And why ? The echo of these questions penetrated Patrick De Clerck's first two Canti, based upon a poem by Fjodor Sologub (1863 – 1927). The questions are addressed to the unknown friend, who is far away and silent but who might one day, almost by coincidence, discover the meaning and the beauty of these verses. His real name being Fjodor Teternikov, Sologub is one of Saint Petersburg's first exponents of Russian symbolism. After his death, his works are buried for half a century, as his solipsistic pessimism and his fascination with demons cannot but earn the party's official condemnatory judgement. But what remains of art when we replace its nostalgia for happiness with the optimism of a brass band ? Even before the turn of the century, Sologub unravels this mystery:

By appealing to his unknown friend in 1898, Sologub also inaugurates the debate on the purpose of poetry. The poet speaks but who is listening ? In his 1913 essay On behalf of the speaker, published in the new periodical Apollon, Mandelstam on his turn ponders over this purpose at a time when symbolism asserts its ability to grant poetry a new statute: the poet writes for the simple purpose of hearing his own echo, like a musician who would cast a sound into an edifice in order to reap it thousand fold through resonance. Mandelstam uses two metaphors to illustrate the artist's conflicting attitudes: the first turns the reader's psyche into a conch, sending back an echo that both fulfils the expectations of its creator and confirms his calculations. The second, more pessimistic metaphor, is that of the bottle floating in the sea. It has fallen prey to an ocean of uncertainty and its sole inscription reads: "To he who finds me". Instead of representing a clear indication to the reader, the poem at this point merely consists of a soft and melancholic murmur. This soft sound is at the mercy of a breeze that carries it towards its destiny, which is often fulfilled after the poets demise:

My voice is weak but I am alive and my presence on earth brings happiness to some A distant posterity will find its remnants in my verse Maybe…Who knows ? (Jevgenej Baratynski)

The privileged moment of art lies in the junction, out of place and out of time, of two different solitudes. At this cross-roads, the most complete and mysterious intimacy is born. Most of Schubert's ultimate masterpieces remained forgotten for decades. The actual meeting did not occur until a century had passed and it joins millions of distant friends up to this very day. Sologub's poetic reflections inspired Patrick De Clerck's first two Canti. In Canto I, a high-pitched voice is accompanied by an instrumental ensemble consisting of the flute, the clarinet, the harp, five strings and percussion, with a leading role for the bells and the vibraphone. Canto II is limited to four instruments: the clarinet, the violin, the cello and the piano. This linear and concentrated accompaniment induces an amazing osmosis between text and music, between the melancholy of the words and the modest hymn that prolongs them. Nevertheless, the sonorous atmospheres of the two Canti are distinctly different. Although Canto I calls for a larger cast, both music and text induce a feeling of such utter solitude as to border on desolation. By accumulating semitones, the initial melodic motif focuses on faint intervals that mirror the poet's psychological confinement . As a prelude to the second quatrain, a motif of repeated notes reminiscent of an orthodox hymn introduces a brief moment of serenity and light. In this manner, each quatrain is framed by an instrumental commentary that translates the faintly nostalgic atmosphere of the text with a truly exceptional awareness. The listener simultaneously feels the intensity of the message and the enormous distance that separates it from the unknown friend, who is far away and remains silent. Canto II repeats the same text but approaches it from an almost entirely different angle, less resigned, fiercer. Although only four instruments are required, the sonorous climate is less desolate, thanks in particular to the cello and the clarinet, two instruments that have inherited the extreme flexibility of the human voice. The piano fulfils the very specific task of highlighting the commentary through specific chords as clusters. This role reminds us of the bells in Canto I, those bells that are inextricably bound up with the Russian perception of space.

Canto III is a purely instrumental composition consisting of three parts, for piano and two important groups of percussion instruments. This 'sonata' has nothing in common, however, with Bartok's famous Sonata for two pianos and percussion, since the expressive equilibrium is fundamentally different. The first and last movements actually resemble wordless melodies, destined in particular for the piano and the bells. The second movement abandons these poetic climates and presents itself as a kind of scherzo that is completely dominated by the interaction of sound between three instruments: the marimba, the vibraphone and the piano.

Strangely enough, the eminent place Anna Akhmatova (1889 – 1966) occupies in twentieth century Russian poetry is hardly reflected in this century's musical production. Serge Prokofiev (Five Poems, opus 27, 1916) and Arthur Louriée (Five melodies of the Rosary, 1914) are practically the only composers to be interested in Akhmatova before the 1917 Revolution. After the Revolution and based upon suspicions, the soviet regime decides to prosecute this great poet. Her first husband, poet Nikolaj Goumiliov, is executed in 1921. Her son is arrested several times and the poet herself is completely banned from soviet literary life from 1946 to 1962. But even in 1962, the periodical Novii Mir refuses to publish Requiem, the great poem on Stalin's victims, written a quarter of a century earlier. In Russia, the work was not to be published in full until 1988. Nevertheless, it did arouse the interest of three musicians: Boris Tichtchenko as of 1962 (but his oeuvre was not to be performed until 1989, at the occasion of the centenary of Akhmatova's birth), followed by English composers John Tavener in 1980 and Michael Tippett in 1982 (in The Mask of Time). Otherwise, the harvest is both poor and rare. Chostakovitch in particular is conspicuous by his absence. Nonetheless, he had been considering using the text for Requiem but refrained from doing so as soon as he set eyes upon his former student Tichtchenko's score. Eventually, he breaks the silence in 1973 through an intermediary, since the cycle Six Poems by Marina Tsvetayeva, opus 143, ends with a tribute to Akhmatova.

Anna Akhmatova writes her Northern Elegies between 1921 and 1955. The First Elegy in particular is dated September 1940 in Leningrad and October 1943 in Tachkent, the city to which she is evacuated as Leningrad is under siege. Despite their elegiac titles, these poems evoke nostalgia for the past rather than conjuring up images of death. Only memories can still bestow some meaning upon times forever in the past. In this way, the First Northern Elegy evokes the Russia of Dostoievski. The streets of Saint Petersburg resemble an 'old lithography', its velvet salons as the perfect background for a meeting with the beautiful Anna Karenina, the memory of a woman 'with blue eyes as crystalline as the sea'. However, we should not forget the other side of the coin: the extreme cold, Omsk (the place to which Dostoievski is deported), the convict that becomes all-powerful (reference to Stalin), the memory of the Decabrists and Semionov Square. Written in Tachkent in the middle of war, these verses remind us of a past where birth, life and climatic conditions were taken in stride.

Patrick De Clerck spreads the successive themes of the First Northern Elegy over four different pieces. The piano accompanies these pieces with frugality in order to safeguard the legibility and music of the text to the full. The latter is a kind of monologue and its title, Elegy, bears witness to the irreversible character of the memories that are evoked. In her First Elegy, Akhmatova gives this piece the subtitle Prehistory, a reference to the distant character of the piece. After all, these evocations date back to a distant Siberian past and the dark war years. Akhmatova's dramatic approach is underlined by the piano's subtle and varied accompaniment. The latter adds more fragmented, hesitant elements to the next two melodies, the text of which evokes a more serene and milder past. The last melody recaptures the more obstinate accents of the beginning in a dialogue that reminds us of another great lady of Saint Petersburg, viz. Galina Ustvolskaya, whose solitary and terrible fate is contrapuntal to that of Anna Akhmatova. Nevertheless, the fate of both women is situated in the same universe, wildly independent of Russia's great northern city. As a frequent visitor of Saint Petersburg, Patrick De Clerck creates the perfect symbiosis with this extraordinary, sensitive and profound world we call Russian poetry.

Canto D'Angelo is a modified version of a piece taken from Patrick De Clerck's voluminous 1991-1992 cycle, written on poems and sonnets by Michelangelo. The text is set for baritone, accompanied by an instrumental quintet (the flute, the clarinet, the violin, the cello and the piano) and a percussion section consisting of the bells or of instruments of similar sonority (the vibraphone, the gong). The song is performed 'quasi parlando' in order to let the text come to the fore. Some of the first images it conveys are ambiguous ('occhi santi', 'al divo aspetto'). These quickly make way, however, for the amorous nostalgia of an ageing artist ('O fallace speranza degli amanti', 'e parte da l'un zoppo Amore'). The music accompanies this sad bitterness ('amari e triste pianti') by means of a light pulsation, that uses the diversity of the bells with discretion and refinement. In 1544, during his stay with an exile from Florence called Luigi del Riccio, Michelangelo requested that the man thank a Franco-Flemish musician called Jacobus Arcadelt, who had written a madrigal on one of his poems, by offering him a piece of silk he had been thinking of using for a waistcoat. Almost five centuries later, Flanders and Italy meet once again in the subtle game of elective affinity.