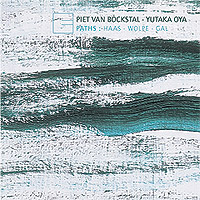 The three composers brought together here were all victims of Nazism at a time when they were eminent representatives of German culture (Stefan Wolpe), of Austrian culture (Hans Gal) and of Czech culture (Pavel Haas). Yet since all three were of Jewish origin, the right to be a part of these cultures had been taken away from them, however talented they might have been, and each was to face a different fate, emigration and its attendant difficulties for Wolpe and Gal, deportation to Terezin and death in Auschwitz for Haas.

Pavel Haas (Brno, 21 June 1899 – Auschwitz, 18 October 1944) Although his father intended him to join his shoe factory, Pavel Haas, who was more interested in music, was able to complete his studies in the Brno Conservatory, recently set up by the fledgling republic of Czechoslovakia, spending three years (1920-1922) in the class of Janacek. His brother Hugo had no greater liking for shoes and had started a successful acting career (that took him to Hollywood), enabling Pavel to write some incidental music and film scores. Although his setting of Wozzeck by Büchner in 1923 – two years before the premiere of Alban Berg’s opera – met with no success, in contrast, an opera entitled The Charlatan (1938) was well received and even won the Smetana Prize. After a First String Quartet, op. 3, in one movement (1920), the Second String Quartet, op. 7 (1925), inspired by a holiday in Moravia, illustrates both the influence of Janacek and, in the third movement, the composer’s Hebrew roots. The influence of folklore is even more explicit in the five song cycles composed between 1919 and 1940. As for the Nazi menace, it also left its imprint on his works composed from 1938 onwards, such as the Third String Quartet, op. 15, which quotes the famous chorale tune Svati Vaclave: “Saint Venceslas will not let us or our descendents perish”. This very preoccupation is to be found in the Suite for oboe and piano, op. 17, that Haas had started to compose on 18 July 1939, four months after Hitler’s entry into Czechoslovakia. According to Haas’s pupil and biographer, Lubomir Peduzzi, it is possible that this instrumental suite had formed the music of an anti-Nazi cantata for tenor and orchestra, the text of which was carefully hidden and has not so far been found. This interpretation is apparently confirmed by the use of melodies symbolising nationalist feelings such as the Venceslas chorale or the Hussite song Buoh vsemohuci (God almighty) in the second movement that was completed on 4 October 1939, i.e. the day when Germany proclaimed its complete victory over Poland. At once starting work on the final movement, Haas again made ample use of the Venceslas chorale as though his prayer wanted to reject any despair, even giving him the strength to start a big symphony. Two movements had been finished and in part orchestrated when in December 1941 he was deported to Terezin. In order to save his wife, who was Russian, and his daughter, Haas had divorced in April 1940. Upon seeing him in deep depression when he arrived in Terezin, Gidéon Klein took care of him, giving him manuscript paper as well as courage. Three only of the eight works he composed in Terezin have survived, yet they are consequential both ethically and æsthetically. Written in 1942, the male chorus piece Al S’fod (Do not lament) is based on a Hebrew text. The cycle, Four songs on Chinese poems for bass and piano, clearly reflects the feelings of everyone in 1944. Finally, the conductor Karl Ancerl saved the Study for strings that he had conducted in September 1944 before a delegation from the Swiss Red Cross. In a Nazi propaganda film Pavel Haas can be seen acknowledging the public, barely five weeks before he was deported. The Suite for oboe and piano is thus the starting point for the path of suffering that came to an end five years later in the gas chamber in Auschwitz.

Stefan Wolpe (Berlin, 25 August 1902 – New York, 4 April 1972) Of Russian and Jewish origin through his father, Hungarian by his mother, Wolpe studied composition from 1920 at the Musikhochschule in Berlin with Paul Juon, Franz Schreker and, privately, with Ferruccio Busoni. He very quickly joined the turbulent circles of the artistic and political avant-garde, notably the cultural organisation Novembergruppe founded in 1918, which included K. Weill, H. Eissler, P. Jarnach, H. Scherchen, E. Erdmann and the Russian J. Golychev, who, with J. Arp and E. Schulhoff, was the driving force in dadaist circles. The painter and poet K. Schwitters also attracted him, inspiring in him a “miniature opera” for tenor-reciter-clown and piano (1929) based on his album Anna Blume. Influenced by Bertolt Brecht, without however directly collaborating with him, Wolpe at this time was writing proletarian marches and pacifist songs, as well as taking part in cabaret shows and workers’ drama productions. This was the Berlin of the 1920s, with its militant socialism. In 1933 Wolpe found refuge in Vienna, where for a while he had lessons from Webern. After emigrating in 1934 to Palestine, he became the first composition teacher at the Jerusalem Conservatory. He wrote a series of works of Biblical inspiration but also formalist scores such as Three little canons for viola and cello (1936), and a piano album entitled Four Studies on basic series (1935/36). The fourth of these is a large-scale ‘Passacaglia’ based on twelve series and twenty-two intervals from the minor second to the augmented seventh. Despite his fascination for the Palestinian countryside and milieu (notably the communal experience of the kibbutzim), Wolpe’s communist convictions were ill assorted with the Zionist militancy that ruled in many Israeli circles, and his very difficult serial music did not make things any easier. Wolpe emigrated in 1938 to the USA, becoming an American citizen in 1944. With the declared aim of composing music that was atonal yet greatly simplified, he substituted less elaborate structures for rigorous dodecaphonic serialism. Another emigrant to the USA, Theodor Adorno, hailed him as “an outsider in the best sense of the term”. Some scores intended for audiences unprepared for this type of issue marked a return to tonality. This is the case with the ballet The Man from Midian of 1942 and the Cantata “Yigdal” (1945) composed for the Synagogue of Fifth Avenue in New York. It was, however, especially as a teacher that Wolpe influenced American musical life, David Tudor and Morton Feldman being among his pupils, working at Black Mountain College (North Carolina), that shrine of the American avant-garde cultivated by John Cage, Merce Cunningham and Robert Rauschenberg. It was there that he composed his only large-scale orchestral work, a Symphony (1955/56, rev. 1964), the highly developed structure of which (it was refused by the orchestra that was supposed to give the first performance) did not diminish the power of its dramatic expression. Most of the other scores were limited to chamber music, in particular a Sonata for violin and piano (1949) and two quartets for various instruments and percussion (1950/55). The rigorous writing was coupled to a desire for expression manifested in such annotations as “a kind of slight trembling, song of the souls”. Visiting the summer classes of Darmstadt several times between 1956 and 1963, Wolpe pleaded the cause of a “regeneration of expression”, though without much success as far as the dominant clan was concerned, for it considered that, apart from himself, it was all “out of date”. The end of Wolpe’s life was mainly affected by Parkinson’s disease, which had started in 1964. The late works sum up his expressive concerns in a leaner, more linear language that is heralded in the Cantata for mezzo, vocal ensemble and ten instruments (1963) with texts by Herodotus, Hölderlin and the American poet Robert Creeley. After two Chamber Pieces for 14 instruments (1965 and 1969) and Form IV: Broken Sequences (1969) the Quartet in two movements of 1969 constitutes a veritable testament of the composer, whose career, beset by the convulsions of history, only achieved fame some twenty years after his death. A Stefan Wolpe Society was formed in 1981. The archives are shared between the S. Wolpe Archives of York University, Ontario, Canada, and the Collection S. Wolpe of the P. Sacher Foundation in Basel. The four-movement Sonata for oboe and piano was composed between 1938 and 1941 in the early years of Wolpe’s American career. The first movement, ‘Allegro commodo’, surprises with the strictly tonal language of the introduction and its contrapuntal rigour, though these traditional structures quickly evolve in the direction of an atonal fabric of increasing density that the opening bars make more explicit, thus responding to a concern he had already expressed during his stay in Palestine. The slow movement, ‘Molto adagio’, reinforces this concern for expression. After a short movement lasting barely a minute entitled ‘Bitter, violent and rapid’, the work ends with an ‘Allegro con grazia’ which starts off with a dodecaphonic series that becomes the object, albeit freely treated, of numerous transformations. The work is thus a very typical illustration of Wolpe’s æsthetic desire to make serialism less restrictive and more directly expressive.

Hans Gal (Brunn, 5 August 1890 – Edinburgh, 3 October 1987) Of Jewish-Hungarian origin, Hans Gal was born during a holiday near Vienna where his father was a doctor. Piano studies commenced at the age of eight were continued at Vienna’s new conservatory, at which he himself taught from the age of nineteen. He nonetheless pursued his composition studies with Eusebius Mandyczewski (1857-1929), an intimate of Brahms, and with the musicologist Guido Adler, a friend and the first biographer of Mahler. Among Hans Gal’s first compositions, a Symphony was awarded a State Prize in 1915, though, like the two Quintets of the same period, it was subsequently rejected by the composer and was never published. Gal at length gave the opus number 1 to a cantata Von ewiger Freude (1912), published by the Viennese firm Universal Edition. His catalogue includes only published works, which does not prevent them, despite the uncertainties of emigration and war, from surpassing one hundred, thanks to his exceptional longevity (he died almost a centenarian). Appointed director of the Musikhochschule in Mainz in 1929, Gal was driven out by the Nazis in 1933. He found refuge first in Vienna and then, in 1938, in Great Britain, where he was interned the following year as a citizen of an enemy country. When after a year he was released, he found himself without a job at the age of fifty, and to the tragedy of those war years was added the suicide of a son. It was not before the end of hostilities that he was able to teach at Edinburgh University and enjoy the last period of his career as an intellectual and social success, thanks notably to Rudolf Bing, another Austrian emigre, who involved him in the setting up of the Edinburgh festival. Whereas before the war Gal had gained celebrity with five operas composed between 1919 and 1933 and with some vocal works, he thereafter devoted himself mainly to orchestral music (three symphonies, several concertos and concertinos) as well as instrumental music (quartets, trios, sonatas). Among the latter, the Sonata for oboe and piano, op. 85 (1964) illustrates Gal’s special, lifelong affinity with Johannes Brahms, whose biography he had written some years previously. Already by the mid-twenties he had been the editor of the first ten volumes of the complete edition published by Breitkopf & Härtel. It is indeed Brahms’s lyricism that can be found in the first movement, ‘Tranquillo con moto’, and also, though to a lesser degree, in the following ‘Pavane (Allegretto)’. The finale, ‘Allegro sostenuto assai’ has a more exuberant character, the oboe lending a Scottish touch. Less inclined towards modernity than his near contemporary Berthold Goldschmidt (1903-1996) who had faced similar difficulties, Hans Gal did not benefit, like the former, from a late blossoming discography, and it is now time to discover a composer who before 1933 was being compared with Franz Schreker and Richard Strauss. Thanks to his daughter Eva Fox Gal and her husband Anthony Fox, the heritage and the cause of Hans Gal have been championed by many publications and by an internet web site (www .hansgal.com.).