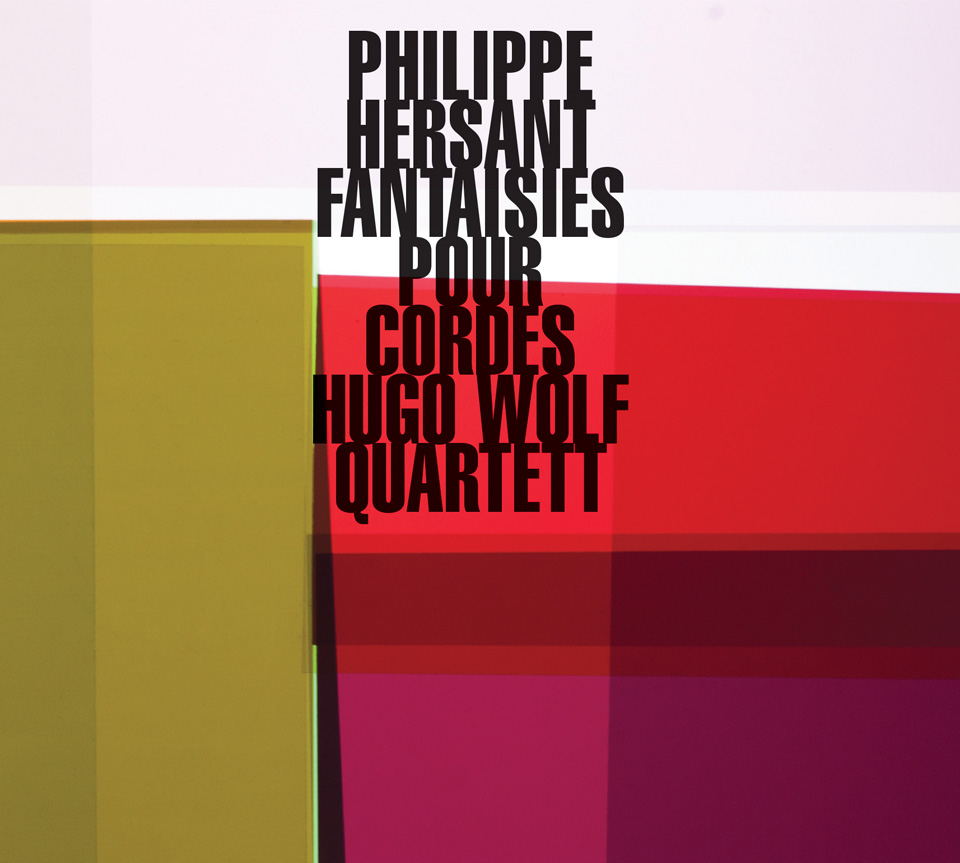 ONZE CAPRICES, originally for two violins, comes in part from the music I composed for a show by Jean Jourdheuil and Jean-François Peyret, performed at the MC 93 in Bobigny in 1993.
They are very short pieces, about a minute long; they all use, in an obsessional way, the same motif (rhythmic or melodic) and the same instrumental formula. In remembrance of the theatrical show Fantaisies-Kafka, which is at the heart of these Onze Caprices, I have given them all titles borrowed from Franz Kafka’s short stories.

I have since made several transcriptions of these duets (for two cellos, viola and cello, violin and viola, etc.). The recording proposed here combines several of these versions. P.H.

My QUATUOR À CORDES N°2 (String Quartet no. 2), which was commissioned by the Ministry of Culture, was written at the request of the Association ProQuartet, for the International Quartet Forum in 1988. The Quatuor Enesco, to whom it is dedicated, premiered it at that event.
In certain movements of this quartet I took elements, substantially reworked, from music that I composed for a performance by Heiner Müller, Jean Jourdheuil and Jean-Françoise Peyret, Paysage sous surveillance (Description of a Picture), presented at the MC 93 of Bobigny in January 1987.
The piece has four movements of very different lengths (Moderate – Recitativo – Very lively – Very slow). The first and last movements are the principal movements. Their respective characters, and the type of writing they demonstrate, radically opposes them. The first movement is agitated, lyrical and very dense. The fourth is static, slow and has a funerary and obsessive character.

I was initially planning to confront them in an abrupt fashion and thus give the work the form of a diptych. In the end I added two intermediary, very short movements. Their primary purpose is to facilitate a dramatic progression between the two extremes, while reinforcing the architecture of the ensemble: the second movement (after the recitativo of the first violin) announces the last movement, whereas the third movement (a scherzo) is a fleeting reminder of the first. P.H.

FANTAISIES SUR LE NOM DE SACHER
This piece has been in the works for years. First performed in 2008, the first version for string trio included only six fantasies. I added two the following year, then an additional instrument (second violin). This version for string quartet was commissioned for the Cully Classique Festival, where it was premiered in 2012. Finally, for the Grand Prix Lycéen for Composers,
I imagined a version for string orchestra, commissioned by Musique Nouvelle en Liberté (2013).
The initial challenge was to write a series of pieces that were as different as possible, from a basic material that was very narrow. That common material is a short motif of 6 notes, which correspond (in Germanic writing) to the letters of Sacher’s name (with a few twists): S [Eb] – A – C – H [B] – E – R [D]. This motif has already been used by a number of composers (Dutilleux, Boulez and Britten) in their homages to Paul Sacher, the great patron and conductor.
Joined together by the omnipresence of these six notes, the eight fantasies offer strong contrasts in character and style: the first has a high-pitched, rarefied atmosphere à la Shostakovich; the second has a taunting and obsessional tone; there is a dramatic, tense ambience in the fourth… Two others showcase the voices of the soloists: the viola (lyrical) in the third and the cello (stormy) in the seventh.

Some quotations pepper the discourse: in the third fantasy an altered version of a passage from Beethoven’s String Quartet No. 13, and the sixth combines motifs borrowed from Mahler (Symphony No. 4), Stravinsky (Symphony of Psalms) and Shostakovich. A falsely naïve, short children’s song closes the set. P.H.

The CINQ MOUVEMENTS POUR QUINTETTE À CORDES (Five Movements for String Quintet) were commissioned by Ensemble Opus 62 who created them in 2010 at the Prieuré de Blyes. I have since substantially reworked the score – especially the first two movements – and it is this new version that is the subject of this first record.
These five pieces for String Quintet  have different origins, but there are some hidden links that nonetheless unite them. The first movement is built on a chromatic motif, which is quite turbulent, and often presented in unison by the five instruments (two violins, a viola and two cellos). This same theme, metamorphosed, will linger over the last movement in a completely different context.
The second movement, which is very dramatic and animated, was inspired by the second of my Cinq poèmes de Georg Trakl (Five Poems of Georg Trakl), called Abandon à la nuit (Surrender at Night), for baritone and orchestra. Although the text is absent here, the spirit of the Austrian poet permeates this piece.
Lunar cloud! Blackness falls
From wild fruit in the night
And our space becomes a tomb
And our earthly life, a dream.
The third movement is essentially devoted to the viola. Surrounded by pizzicati in the violins and cellos, it plays out in one long phrase that borrows from both my Apparitions and Six bagatelles.
The fourth movement also comes from Apparitions for accordion, violin and cello. This is a short, taunting and intense scherzo.
The fifth and final movement, which is a kind of religious song, comes largely from the epilogue of Patmos, my piece for string orchestra. P.H.