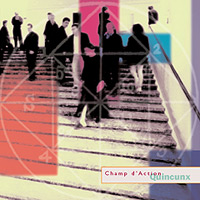 Images of order and chaos and images of motion and evolution in time are characteristic of contemporary music. They show the way in which music can reflect a society which is strongly oriented towards science and technology. Whereas scientific research used to focus on the study of condition, it has now increasingly been shifting its focus to the study of motion and evolution in condition. Particle physics on the one hand aims at isolating and studying the smallest particles; on the other hand, and more importantly, it studies the motion of the smallest particles by means of the particle accelerator or cyclotron. The results show that a lot of particles are moving in an extremely chaotic way on the micro-scale, whereas on the macro-scale they seem to be very ordered. Mathematics is no longer only looking for finiteness to hold on to but is more and more looking for the limits of infinity. Fractals are geometric structures with an infinite irregularity and complexity, although they seem to be very regular at first sight. They are compared to infinite-peri-meter surfaces; biologists are convinced that the endless branches of blood vessels or the complex alveolar lines are fractally structured. Order and chaos go together. The time element has gained more and more importance in scientific research of motion, evolution and infinity. The names of Stephen Hawking, Benoit Mandelbrot and Ilya Prigogine are linked to various aspects of this kind of scientific research.

As mentioned above, images of order and chaos combined with images of motion and evolution in time have become characteristics of contemporary music. They are especially characteristic of the modernist school which considers order and complexity, condition and evolution to be elementary pillars for sound production: the purposive evolution of Xenakis’ stochastic research, György Ligeti’s sound-field evolutions (till 1980) and his obsession with evolution and speed (after 1980), Brian Ferneyhough’s New Complexity which assumes a material reservoir out of which all evolution arises but which leaves out the material reservoir itself in the composition. Despite all style diversity and all differences between individual composers, contemporary music shows specific features which can be found within many styles and composers. One such feature is the principle of form which reflects the compostion of motion throughout time; the evolution of a condition leads to another condition, from a moment of order through a period of chaos to another moment of order. The music is permanently in motion, time indicates the duration of the moments of order and chaos, and of the moments of motion and rest. The permanent motion displays itself in all parameters of musical form. The structure of sound shows that even order can be a complex fact as it is enough to consider one element or parameter as a constant (e.g. an ostinato) within a permanently changing entity to identify a phenomenon within chaos as ‘well-ordered’. This kind of music is not characterized by concepts such as repetition, literal resuming or reexposition. Identical elements (themes, repetition of complete parts) have been replaced by resembling or similar episodes. The indefinite number of possibilities (the resembling variety or the different pseudo-similarities) is more important than the recognizable identity.

The title choice already demonstrates the above-described attitude of the Flemish composers whose compositions are compiled on this CD. Luc Brewaeys chooses Trajet: a route, a covered distance, an evolution of motion from a starting point to a finishing point. Eric De Visscher is thinking of Stille und Lärm, silence and noise as two extremes towards which an evolution can tend. However, these extremes themselves cannot be found in his composition. Apeiron, the title of Serge Verstockt’s composition, means ‘endless, infinite, uncountable’ and directly refers to the indefinite number of possibilities, both in order and chaos, which this music has in common with mathematics and science. Fréderic D’Haene calls his composition Inert reacting substance of ( ) which could be an objective scientific conclusion. Small particles are now ‘small sounds’, which display inertia or slowness, pseudo-standstill and reactions in a specific matter. Geert Logghe’s Time before and time after stands for the phenomenon of the interval of time within, before, and after an evolution.

Champ d’Action is working with ‘deSingel’ (Antwerp), Kaaitheater (Brussels) and ‘Ars Musica’ (Brussels). During the arts festival Antwerp ‘93 Champ d’Action performed both Flemish and international compositions at four concerts. Champ d’Action was invited by Gaudeamus and November Music to tour in the Netherlands. The ensemble has been enjoying a growing interest ever since.

Champ d’Action has built up a steady collaboration with the Brazilian conductor Celso Antunes. The ensemble also invites guest conductors such as Michael Finnissy and Peter Rundel.

Johan Bossers studied piano with Fréderic Gevers and Levente Kende at the Antwerp cnservatory. After obtaining his higher diploma he started teaching at the Antwerp conservatory in the class of the above mentioned professors. He and Janna Van Mechelen won Belgium’s acclaimed Orpheuscontest in 1987. Johan Bossers has been involved with Champ d’Action ever since the group was founded. Several orchestras often invite Johan Bossers to perform new music. He also assisted in the recording of a CD which was entirely devoted to Giacinto Scelsi’s piano music.

Celso Antunes studied singing and conducting in his home town of Sao Paulo and started his carreer as a singer, choir master and conductor at an early age. He founded and conducted several choirs. In 1986 he was awarded a scholarship by the ‘Deutscher Akademischer Austauschdienst’ (DAAD) and studied at the Musikhochschule in Cologne. He also studied conducting with Helmut Rilling and John Eliot Gardiner and since 1988 he has been a guest conductor at the ‘Camerata Fakuda’ in Brazil and and of the «Neues Rheinisches Kammerorchester’. Celso Antunes founded the Tippett-Ensemble in Cologne in 1991; together with this ensemble he recorded Paulo Chagass’ ballet ‘Sodoma’; he is also the conductor of the Audienda choir in Krefeld and of the Kammerchor Musica Mundi in Cologne. Celso Antunes started working with Champ d’Action and has become the permanent conductor since 1993.

Geert Logghe ’s title Time before and time after refers to a verse from T.S. Eliot’s collection of poems Four Quartets. Logghe links the sound-evolution concept to a very specific content and expression although the composition is not aimed at illustrating and representing poetry. Logghe places admiration for scientific evolution and lack of communication between people in opposition. The sound in the opening of the piece expresses this idea; what seems to be absolute music, appears to be a hidden, non-explicit attempt to come to expression, communication. This music shows a kind of reserve which will only allow the open listener to communicate and to be conscious of the expression contained in this music. Very purposive changes in motion become apparent in this episode; sometimes they are unequivocally surrounded by different parts (the entry is quasi heterophonously performed by the two violins), sometimes they are slowly generated sound fields. There are always very slow pitch evolutions: widely spread, roughly rising or falling motions. This leads to the unpleasant impression that ‘ugly’ glissandos are breaking each structure or ironically surprising interventions run through nicely structured evolutions, or wind players interrupt the romantic timbre of the strings. Feelings of discomfort continuously break the constructive impulses. Logghe offers a bogus solution in the final stage: a rough rise results in a triumphant-like motif from the trumpet which is taken over by the violin and the flute. High and thin flageolet tones refer to the opening of the composition and try slowly to rise higher. However, an aphoristic falling second motif gives this height a very thin and unstable aftertaste. Logghe’s composition is a good example of how poetry can serve as an incentive to write music; in such a case the music does not closely stick to the poem, the poem is not set to music or given musical expression; after reading and interpreting by the composer, the composition becomes the sound reproduction of a poetic experience.

Geert Logghe studied the piano with Claude Coppens and composition with Roland Coryn at the Ghent conservatory, where he has been working as an assistant for five years. He and Tomma Wessel formed a piano-recorder duo playing only contemporary music. Geert Logghe received commissions for Antwerp ‘93, the Gele Zaal, November Music and Opera Mobile.

Here is a place of disaffection Time before and time after In a dim light: neither daylight Investing from with lucid stillness Turning shadow into translent beauty With slow rotation suggesting permanence Nor darkness to purify the soul Emptying the sensual with deprivation Cleansing affection from the temporal. Neither plenitude nor vacancy. […]

Ridiculous the waste sad time Stretching before and after.