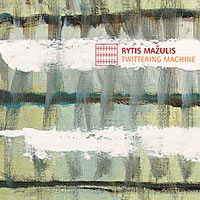 Rytis Mazulis (b.1961) and his work represent new generation of Lithuanian composers. Having studied composition with Bronius Kutavicius and Julius Juzeliunas, Mazulis today is an adherent of the intellectual neo-avantgarde attitudes. His composition technique is characterised by consistent minimalism, development of the mensural canon technique, echoes of spectral music, as well as an adoration of the work of Josquin des Prés, Giacinto Scelsi, Conlon Nancarrow, Horatiu Radulescu, Silvia Fómina, and Alvin Lucier. At the same time, the imagination of the artist and the keen eye of the researcher paradoxically yet harmoniously interact in Mazulis’ music. The composer intuitively seeks to defeat the fatality of narrative (linear) time, explore the depths of a sound, and discover new projections of musical time and space. Having approached the compositional problems of Guillaume Dufay, Josquin des Prés, and Johannes Ockeghem, Rytis Mazulis studied old polyphony, Renaissance musical notation, techniques, mensural canons, and ways of structuring complex contrapuntal textures. The technological procedures he employs reflect 20th century theoretical insights, however, only those ideas, which guarantee the purity of the style, the power of the intellectual construction, and the strictly determined form are selected and then creatively reproduced. The composer has legitimized a charismatic canon model, which should be considered a trademark of Mazulis’ creative work, as a universal composition technique. In the last decade, the composer delves into extraordinary sound microscopy creating his own rituals: he divides a semitone interval or basic rhythm unit into elements of irrational and utopian values and composes the individual movement of tempos and durations for each voice. The interaction of these voices results in mensural, polytemporal, and fractal canons. Mazulis looks at the ‘crumbled’ microintervals and microdurations as if through a magnifying glass, shaping from these abstract forms of his compositions – symmetric, palindromic, spiral. Rytis Mazulis creates graphic prototypes of his scores, which not only discipline the compositional insights but also become the ground for original quests. These prototypes (sometimes exceeding to the complete ‘one-page’ scores) are graphic blueprints of sounds, teleological schemes with the author's imprints. Their graceful architectonics reveal the integrity of geometric forms.

The Twittering Machine comes from the debut period of the composer. In his personal career it marks a ‘machinistic period’ (1984-1987), on the larger scale it represents an entire generation of Lithuanian ‘machinists’ (Rytis Mazulis, Sarunas Nakas, Nomeda Valanciute, and others). These composers brought industrial pulse, technical sounds of the city and fast-moving machinery to Lithuanian music, and provided it with futuristic labels. The sound of the Twittering Machine could resemble mechanical “music” of the gearwheels in action. In Part I Mazulis has drawn the sounds of the metropolis on a one-page score. Four crosswise entering segments start spinning the wheels of chords and their momentum mechanically rolls circular forms forth and back. Three rotating circles in the score are connected by common segments (axes) that like some gear box transmit the sound process from one phase into another. And so the twittering cycles of open form roll on with gusto, accompanied by a lingering scent of pseudo-tonalities (C minor, A minor, E flat minor) that can be sensed only subliminally. Part II is driven by the incessantly pulsating ‘engine’ of fast, acute eights and sixteenths, though the parts of individual (real or virtual) performers are still provided with expression marks reminiscent of classical tradition (staccatissimo, leggierissimo or marcato e poco pesante). Music is woven of shorter and longer segments, recurring in different phases of intensity. In the middle of each such phase, several voices meet in unison resulting in a short, catchy passage (as if a spirited driver of the ‘machine’ suddenly starts humming some tune…) which is then engulfed by the attacking stream of mechanical energy. Each performer’s part is comprised of seven segments that group up in different ways with corresponding segments of other parts (the first segment of the first piano coincides with the seventh of the second one, the second with the sixth, etc). Concentric structures, their relationships and hidden symmetries underpin a clean-cut form of the opus.

Ex una voce is one of the most ornate and lively computer pieces by Rytis Mazulis. It pulsates with clearly audible phrases, yet the unison (and synchronism) of the different voices is constantly drowned out by drifting clouds of fluffy sound. Time and again the voices escape from the clouds to ‘line up’ and move on, like dancers hand in hand, in arpeggiated triads. Then they start to churn again, forming an exuberant foam, shimmering and exploding with myriads of sparkles which conceal and dissolve the primal melody. This melody is the single point of departure for the composition; all thirteen voices emerge from it (just like the title implies, “from a single voice”), differing only in microscopic tempo gradations. Once he has released the streams of sound, the composer later seems to become merely an observer of the situation. The melody multiplies itself; the polytemporal structure of mensural canon itself generates a sound-script. The fragile sound forms created by the opposites balance on the edge between existence and extinction.

The title plays pun on the titles of Immanuel Kant’s Critique of Pure Reason (1781) and Clavier of Life-giving Water, a well-known piece for two pianos and tape by Lithuanian composer Algirdas Martinaitis (1983). It could also bring to mind the statement of Gioseffo Zarlino that ‘music is but numerus sonorus’. Let us imagine a computer-age utopia: a super-pianist plays with 48 hands (or 24 pianists play together) and his/her/their sounds twist and turn in triangular spaces. The first phase of the composition could be called ‘horizontal and consonant’. Its revolving melody is made of 48 segments – sequences of triad pairs (A major-B flat minor, F sharp major-G minor, E flat major- E minor…), while the voices entering in canon gradually develop into giant 48-sound chords. In the second phase, a ‘vertical and cluster’ one, the third-based melodic segments fall into cluster and oscillate like particles of a super-canon. In the third phase, the melody is spread diagonally across all the voices (as well as its subsequent canonic imitations). Sometimes it seems, however, that Zarlino, Kant, Bach or Martinaitis have nothing to do with this opus. Simply the composer is twirling a sounding kaleidoscope of 48 glass beads (triads).

This opus derives its tension from relentlessly ascending sound trajectories. The fast-moving lines and sustained suspense morph into flickering cinematographic, subconscious images. Is it the sound of utilitarian technical civilisation, or a torrent of numbered rain drops falling down? Or is it a totally controlled army of millions, as in Orwell’s 1984? Is it a picture of wicked reality or just a bare reality or acoustic events hammered by a ‘computer-piano’ that sounds like a drum battery by the end of the Hanon? Music of Mazulis certainly is not representational, or even less so narrative, yet innocently ‘wrong’ title of this canon provokes a slightly ironic attitude. Thus, what is the movement of these lined up, drilled formations of minute elements in the Hanon? A close-up of thousandfold canon captured in a frozen moment would reveal a sequence of sixteenths, lined up into a chromatic scale. At this micro-level, the structure is regulated by the Fibonacci sequence. However, a bird’s-eye view of the composition would reveal the strict form of a giant palindrome. Grazina Daunoraviciene Translated by Arunas Bakanauskas and Irena Jomantiene