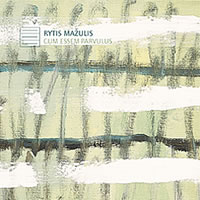 Rytis Mazulis (b.1961) and his work represent new generation of Lithuanian composers. Having studied composition with Bronius Kutavicius and Julius Juzeliunas, Mazulis today is an adherent of the intellectual neo-avantgarde attitudes. His composition technique is characterised by consistent minimalism, development of the mensural canon technique, echoes of spectral music, as well as an adoration of the work of Josquin des Prés, Giacinto Scelsi, Conlon Nancarrow, Horatiu Radulescu, Silvia Fómina, and Alvin Lucier. At the same time, the imagination of the artist and the keen eye of the researcher paradoxically yet harmoniously interact in Mazulis’ music. The composer intuitively seeks to defeat the fatality of narrative (linear) time, explore the depths of a sound, and discover new projections of musical time and space.

Having approached the compositional problems of Guillaume Dufay, Josquin des Prés, and Johannes Ockeghem, Rytis Mazulis studied old polyphony, Renaissance musical notation, techniques, mensural canons, and ways of structuring complex contrapuntal textures. However, we almost do not hear in his works reconstructions of such music (except perhaps in the composition, Canon solus, 1998, included on this CD). The technological procedures he employs reflect 20th century theoretical insights, however, only those ideas, which guarantee the purity of the style, the power of the intellectual construction, and the strictly determined form are selected and then creatively reproduced. The composer has legitimized a charismatic canon model, which should be considered a trademark of Mazulis’ creative work, as a universal composition technique. In the last decade, the composer delves into extraordinary sound microscopy creating his own rituals: he divides a semitone interval or basic rhythm unit into elements of irrational and utopian values and composes the individual movement of tempos and durations for each voice. The interaction of these voices results in mensural, polytemporal, and fractal canons. Mazulis looks at the ‘crumbled’ microintervals and microdurations as if through a magnifying glass, shaping from these abstract forms of his compositions – symmetric, palindromic, spiral. The fact that his entire composition is sometimes situated within a semitone interval, its range of 100 cents being an infinite space of sound, testifies to the scale of Mazulis’ sound microscopy. His opuses grow from single element, from single melody, and subsequently from single sound only. Rytis Mazulis creates graphic prototypes of his scores, which not only discipline the compositional insights but also become the ground for original quests. These prototypes (sometimes exceeding to the complete ‘one-page’ scores) are graphic blueprints of sounds, teleological schemes with the author's imprints. Their graceful architectonics reveal the integrity of geometric forms. Wonderful performers – Ensemble Court-Circuit, Neue Vokalsolisten Stuttgart, and the Latvian Radio Chamber Singers – have given Mazulis a possibility of the live performance of those utopian microintervals. In recent years figures of soloists with headphones have visualised live performances of Mazulis’ music. Electronic metronomes, tone synchronisers, pilot tracks not only help the performers, but also have become an inseparable part of Mazulis’ composition method. After the premiere performance of his composition, ajapajapam, in Berlin at the MaerzMusik Festival (2003), the composer, Tilman Künzel, stated that he had heard ‘humanised computer music’.

Canon solus (Gloria liturgical text, 1998) was written for the Hilliard Ensemble. This composition should be considered rather an exception in the context of Mazulis’ work. This is perhaps the only Mazulis’ piece having obvious links with medieval modality and liturgical music. The composition’s structure consists of two pairs of voices, which are combined using composition techniques of Franco-Flemish school: diminution, augmentation, retrograde, etc. The subtitle of the composition, ‘canon in any tone’ allows one to predict the specific technological prototype of this work, i.e. Johannes Ockeghem’s Mass Cuijusvis toni. It is possible to begin the piece with any tone: a, g, f, or e. Sybilla (text by Petronius, 1996) for mixed choir or 12 voices, was composed for the Gaida Festival. A fragment from the Satyricon by Petronius intrigued the composer with its meanings, expressing the cruel absurdity of a feast scene.

Sybilla, an endless canon moving in round, like Mazulis’ other spiral canons, was drafted on a one-page score. The initial motif of this canon, a pattern which microtonally envelops the central tone, offered the composer a model for its development: the motif is transposed in a sequence upwards and downwards from the tones of a ‘white-key’ diatonic scale. By using the consistent timbral progression (female, mixed, and male voices) Mazulis shapes a palindrome of variable density.

Cum essem parvulus (text from 1 Cor 13:11-12, 2001), written for the Neue Vokalsolisten Stuttgart ensemble, is probably the most autobiographical work by Rytis Mazulis. A certain ‘genealogical’ bond, encoded in the composer’s surname (Mazulis: Lat. Parvulus, Eng. Little Child) could also have inspired an ‘invasion’ of microscopic tone values in the composer’s work. In this way, we can see the formalised idea of the score almost ontologically: a sound emerges, expands, integrates ever larger capacity of microintervals, achieves its maximum, then again begins to shrink and returns back to a single sound. It is also possible to see the scope of the composer’s mathematical manipulations in the structure of the Cum essem parvulus canon. Mazulis seems to have given the performers (and listeners) a simple task: for each of 8 vocalists to sing the same ten tones at a different tempo. In this way a polytemporal canon of 10-tone pattern (in 20-cent microintervals) emerges from an initial unison. The voices, becoming more distant from one another, almost physically expand the sound space. Later after the slow-fast tempo poles turn around, the cluster begins to shrink but the sound process ceaselessly continues moving upwards (from g#1 to c2). In this way Mazulis shapes a perfect palindrome of microinterval spectrum.

ajapajapam (2002), for 12 voices, string quartet, and electronics written for the Latvian Radio Chamber Singers and the Chordos Quartet. The word, ‘japam’ in Sanskrit means ‘repetition of a mantra’, thus ‘ajapajapam’ would be the repetition of a mantra without the mantra itself, which as if lies at a deeper level of consciousness. This is without a doubt Mazulis’ most radical vocal composition. The mystical inner space of the sound should not be identified here with the conventional definitions of the sound art because the music of the ajapajapam, as Mazulis has noted, ‘is as if without music’. The composition consists of one unending, very slowly modulating sound, made of 6-voice microcanons. The sound structure of the ajapajapam is based on drawn-out glissando and interferences in a microintervalic sound spectrum.

It is also possible to call the opus a study of the microcosm of a slowly slipping cluster since in exploring its unexpectedly drawn-out sound field, one is astonished to find signs of modern nonverbal vocal communication. One starts looking for entirely different things: the ‘natural’ breath pauses of the soloists, energetic entrances, the beauty of the timbre of the individual voices, the erupting flight of the string détaché, etc. In the composition ajapajapam, the collectors of macroclusters in Mazulis’ opuses again encounter the new form of sound design. The harmonic capacity of minor sixth (c2-e1) and the strongly hypertrophied duration (each ‘bar’ lasts about 5.95 sec., as indicated in the score) are characteristic for this. The totally glissanding cluster levels any pitch differences (amounting in about 3.45 cents) and the tempo differences of all 6 different voices are so minimal that they rather lie in the subconscious of this structure.

The Latvian Radio Chamber Singers, a group of soloists from the Latvian Radio Choir, LRCS was founded in 1994. Its repertoire is mainly based on contemporary music. The group experiments a great deal, revealing the different nuances and possibilities of the timbre of the human voice, developing its own style and approach to sound and performance, and searching for new means of expression in “staging” music. The LRCS includes works by Luciano Berio, Giacinto Scelsi, Kaija Saariaho, Ton de Leeuw and many others in its repertoire and regularly works with Latvian composers commissioning new works. Recent years have been the most active for the LRCS.

The LRCS has performed at such contemporary music festivals as MaerzMusik in Berlin (2003), the NYYD Festival in Tallinn (2003), as well as Gaida (2002) and Jauna Muzika (2001) in Vilnius. The LRCS regularly participates in the programmes of the Latvian Radio Choir in a number of major music festivals. After a concert at the Covent Garden Festival in London, The Times wrote of the performance of the Latvian Radio Chamber Singers: ‘The multiplicity of textures in close, live dialogue with each other was unusually eloquent.’

KASPARS PUTNINS (1966) has been the conductor of the Latvian Radio Choir since 1992. In 1994 he formed the Latvian Radio Chamber Singers. Kaspars PutniNS has been the conductor of the Balsis youth choir (winner of numerous competitions, e.g. the BBC Silver Rose Bowl in 1991), the Riga Vocal Group, the Latvian Academy of Music Choir, and Eurochoir 2002 and 2004, artistic director of the international choir ‘Kør I Nord’ (The Choir in the North), guest conductor of the Flemish Radio Choir and the Estonian State Male Choir, and a lecturer at national and international choral workshops and seminars. As a conductor, he has been awarded the Latvian Music Grand Prix 1998 (highest distinction for musicians in Latvia) and the Latvian Council of Ministers Award for Achievements in Culture and Science 2000. translated by Arturas Bakanauskas.