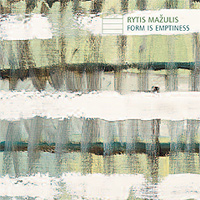 About RYTIS MAZULIS
Form is emptiness

Rytis Mazulis (b.1961) and his work represent new generation of Lithuanian composers. Having studied composition with Bronius Kutavicius and Julius Juzeliunas, Mazulis today is an adherent of the intellectual neo-avantgarde attitudes. His composition technique is characterised by consistent minimalism, development of the mensural canon technique, echoes of spectral music, as well as an adoration of the work of Josquin des Prés, Giacinto Scelsi, Conlon Nancarrow, Horatiu Radulescu, Silvia Fómina, and Alvin Lucier. At the same time, the imagination of the artist and the keen eye of the researcher paradoxically yet harmoniously interact in Mazulis’ music. The composer intuitively seeks to defeat the fatality of narrative (linear) time, explore the depths of a sound, and discover new projections of musical time and space. Having approached the compositional problems of Guillaume Dufay, Josquin des Prés, and Johannes Ockeghem, Rytis Mazulis studied old polyphony, Renaissance musical notation, techniques, mensural canons, and ways of structuring complex contrapuntal textures. The technological procedures he employs reflect 20th century theoretical insights, however, only those ideas, which guarantee the purity of the style, the power of the intellectual construction, and the strictly determined form are selected and then creatively reproduced. The composer has legitimized a charismatic canon model, which should be considered a trademark of Mazulis’ creative work, as a universal composition technique. In the last decade, the composer delves into extraordinary sound microscopy creating his own rituals: he divides a semitone interval or basic rhythm unit into elements of irrational and utopian values and composes the individual movement of tempos and durations for each voice. The interaction of these voices results in mensural, polytemporal, and fractal canons. Mazulis looks at the ‘crumbled’ microintervals and microdurations as if through a magnifying glass, shaping from these abstract forms of his compositions – symmetric, palindromic, spiral. Rytis Mazulis creates graphic prototypes of his scores, which not only discipline the compositional insights but also become the ground for original quests. These prototypes (sometimes exceeding to the complete ‘one-page’ scores) are graphic blueprints of sounds, teleological schemes with the author's imprints. Their graceful architectonics reveal the integrity of geometric forms.

Canon mensurabilis is one of instrumental opuses by Rytis Mazulis where the composer bids farewell to the realm of 12 tempered semitones and trades it for the newly opened world of split semitones. The ephemeral, strange, as if “falsely” intoned music commands listener’s attention and tries to win him over; ever more desirable, it casts a spell of its subtle transparent intonations. Among the insubstantial, detached strands of voices in microtonal pitches, wanders the almost inaudible memory of the twelve-sound world deserted by Mazulis. It is the single tempered semitone that has established itself in a consistently ascending sequence of eight quartertones on the initial scheme of the composition. Later on, the windmills of the Messiaenian spirals of symmetric permutations (interversions) scatter around the tones of this scale, thus producing material for all five voices – structural lines in the composition of the Canon mensurabilis. Treated to such a spin, tones settle down on the staffs according to the rigid rhythmical proportions (mensurations) and continue existing henceforth in a mode of a secret inaudible mensuration canon. Only the concordances of perfect consonances (almost subconsciously perceived structural dividing marks of the opuses by Mazulis) punctuate the gravitating palindromes of micro-pitch harmonies.

“I wanted to create the continuous movement without rests as if in imitation of a Renaissance composer who eliminates rests from canon” (Rytis Mazulis). Undoubtedly the reference here is to Pierre Moulu and his “double-faced” (duarum facierum) Missa Alma Redemptoris Mater. Yet how do the canons sine pausis inspire the 21th century composer who accepts the idea of uninterrupted movement? Mazulis takes material of diverse density (tones, semitones and quartertones) and as a skilled player with structures, arranges geometrical figures of sixteenths – lines, zigzags, triangles… The emerging kinetic soundscapes recur symmetrically until gradually acquiring outlines of a material form. Unisons flow into canons whose voices undergo elongation by adding minute fragments of the sixteenths. Thus the basic segments, lines, their densities and forms yield a range of independent and recognizable images, a symmetric and sterile cycle of ceaselessly moving “film frames” of cubistic forms. Like many of his other opuses, Sans pause employs a neat palindromic form whose structure enshrouds sphinxes keeping guard of their mathematical secrets.

From the super-piano of the Clavier of Pure Reason which took a super-pianist of 48 hands to perform, to nine-part super-harpsichord (the archicembalo of the 21th century). The precise and perfect mechanics capable of producing sounds of microscopic pitch divisions seem to coalesce gradually with the composer’s forms of dissolving micro-dimensions. However, the intoxicatingly euphoric sound of super-mechanism offers something beyond the associations with the European tradition (Nicola Vicentino, Gottfried Wilhelm Leibniz). The Oriental doctrine positing the monadic principle of the world creation appears of no less importance in this piece. Because the evolution of the monad – be it the seed of the soul, spiritual entity or cosmic essence – is manifested both in all elementary forms – and the Kingdom of Gods (Angels). Simultaneously it is the state of the Universe deriving from any monad, Leibniz’s water drop in which he saw the entire world, and the oneness (canon) of Mazulis, constructed from the smallest parts (micro-intervals). The principle of symmetrical monad reflection is preserved in the mirroring images of the Monad’s waves. They vibrate and tremble in sharp, bell-like strokes of the eighths of the tone. However, the hypothetical 21st-century archicembalo and the flight of the monadic poetics of microtones are formalized by the composer according to his self-imposed compositional rituals and rigid “grammatical” rules. All the harpsichords (nine parts) start together, but soon diverge into canons and perform at nine different (though almost imperceptible by the ear) tempos. The segments recur nine times augmenting the expanding cluster that ascends and descends through nine pitch stages. Each of the nine harpsichord parts features 1152 sixteenth notes of the broken semitone, while the keys of the superharpsichord hit 10 368 eighths of the tone throughout the entire opus.

Similarly to Spinoza who once was trying to read the secrets of existence in a mandala, Mazulis attempts at constructing his own concept-scheme of the world, from the crumbs of the European semitone. Controlled by the guide tracks vocalists look at the score and meditate, in the microscopic pitch divisions (of 3,33 ct), the statement from the classical Buddhist work Sutra Prajnaparamita: “whatever is emptiness, that is form, the same is true for feelings, perceptions, impulses, and consciousness.” This project of utopian sound is like a sharp look on oneself, when one speaks with the subconscious voice from across the boundary of other reality and takes the intimation of Oriental sensibility for an answer. The quiet fog of trance, almost immaterial dimensions of sound; a structure without exhausting technological rubbish or the recollection of influences. All of 360 splinters of the former octave sound in each of the voices of the opus. They all have originated from the faceless ultra-chromatic line, produced as if by waving an open fan from the centre sideways. Each of such sounds arrives in rows (melodies) or columns, and spills out into diagonal echoes of micro-imitations. Like disembodied characters (clouds), the ghostly cluster shapes align and creep along like messengers of some important truth on the world and existence. The formal shape of melting, vibrating and instantaneously changing micro-worlds is both mobile and static in its subtle internal movement. Grazina Daunoraviciene Translated by Irena Jomantiene