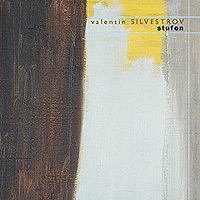 The Cycle of Melodies “Stufen”(“Degrees”)

Countless composers have set A. Pushkin’s famous Elegy to music! Still, the composer Valentin Silvestrov, who possesses an extraordinary talent for reinterpreting poems that have been known since early childhood, has undertaken the task again. Silvestrov on his cycle “Stufen”: “The listener has the impression of leafing through a book or visiting the various rooms of a house, a ‘House of Song’ as it were.” Silvestrov founded his Stufen on Pushkin’s famous poem and on various other masterpieces of Russian poetry. All doors in this ‘House of Song’ are open and we can hear the voices of the various poets uniting in a wonderful harmony: Pushkin, Tyutchev, Mandelstam, Blok and Sologub. Stufen is not Silvestrov’s first attempt to resound these voices. The two-hour cycle Stille Lieder dates back to the early seventies. This particular opus unleashed a violent controversy that still persists today. The composer allowed the poetry in this cycle to “sing itself” and had conceived a highly unusual, anti-concerto way of executing the composition: “All the songs should be sung very softly, with a very light, transparent and clear sound, not too expressively and without psychological interpretation… Preferably, the whole cycle should be performed as one single song.” It is at this point that Silvestrov took a step that was as decisive as it was paradoxical. In fact, the step was so drastic as to tempt some of his colleagues into accusing him of betraying the avant-garde movement. Silvestrov is a child of the neoromantic or new-traditionalist age, and the development of his talent coincided with this musical genre. The radical swing in direction allowed Silvestrov’s lyrical nature to blossom fully. Of all possible styles he elected the “weak” one, or the “metaphorical style”, as he came to label it. It is a style which, at first glance, bears no remarkable features at all. He had preferred the typical avant-garde mode of direct expression of a symbol: the “modern” language as opposed to the “outmoded”, nearly anonymous language of the past. However, this simple stylization was replaced by a mode of expression shaped by individuality and refinement. It is somewhat similar to the motto in the poem by Russian poet O. Mandelstam: “Once more does the skald recite an unknown son. Which he will sing as if it were his own.”

The seventies and eighties saw Silvestrov write a large number of songs in the most literal sense of the word: the Silent Songs were followed by Simple Songs, 1974-81, Stufen (Degrees), 1981-82, and Four Songs based on poems by O. Mandelstam (1982). This impressive vocal avalanche also influenced his instrumental compositions of this particular period. Years later, the composer commented on this turning point in his oeuvre, using words that can safely be described as a creed: “Poetry is essentially music that has been transformed into words meant for eternity… When music touches poetry,… all that matters is the actual meeting between the two. Good verses are known to be laden with their very own kind of music and I merely respond to my need of submitting myself to these verses… Poetry… is the salvation of the most important part of a melody:… the melody as an organism or a whole… That is why, in my opinion, music is still synonymous with singing–even when it cannot be sung as such. There is no philosophy, no world view, only the world singing its own praises as a musical testimony to life itself.”

The cycle Stufen is one of Silvestrov’s most complete “songs”. In the Silent Songs as well as in Stufen, the absence of theme or lyrical hero of romantic art (as in Schubert’s Winterreise), is remarkable. The Stufen comprise a number of lyrical or even personal speeches which, in Silvestrov’s opinion, underlie the very essence of the concept “song”. It is noteworthy that all of Silvestrov’s songs are dedicated to someone. The first song, which was inspired on A. Blok, even carries that very title: Dedication. It is a quite recent song (1997) that was dedicated to his recently departed wife, Larissa Bondarenko, after her untimely death. What is the common denominator in these eleven lyrical ‘Degrees’? First of all, we should mention the meticulous choice of poetry. It is, in the composer’s personal opinion, the actual “heroine of the cycle”. With two exceptions, all pieces are classical Russian elegiac lyricism. The elegy runs like a thread through the entire cycle (we should not forget that, both in Greek and in Latin, the word “elegy” means “tranquil lamentation”).

Various forms of elegy feature among the eleven “Degrees”: love, pastoral and philosophical elegy. They are found in various Degrees of the “House of Song,” from the dilettante “A Stranger’s Poem” (# 2) to the crème de la crème of Russian poetry, such as the aforementioned poem by Pushkin (# 6). From one poem to the next, we are flooded with the typical elegiac themes: soul, tenderness, love, oblivion, selflessness, madness, farewell, suffering, ruin, damnation, darkness, nightfall, night, sleep, dreams, illusion, tranquility, They do not paint a cliché picture but constitute the details of a homogenous whole.

Thus the tranquil celebration of F. Sologub’s “My Soul” (# 3) is linked with Tsjutsjov’s “Oh, My Prophetic Soul” (# 7) and the tragic hopelessness of E. Baratynski’s “What Are You For, Days” (# 5) dissolves into the cautious hopefulness of A. Pushkin’s “Elegy” (# 6). A very specific role is reserved for the last poem, “I Have Forgotten The Word I Wanted To Say” by O. Mandelstam (# 11). According to Silvestrov, “it acts as a funnel in incorporating the numerous motifs scattered throughout the cycle”. The poetic oneness is enhanced by the musical bows and rhymes that are so typical of Silvestrov. The sound of the tetrachord spirals down in recognition of the old songs “Elegy” (# 2) and “I Have Forgotten The Word I Wanted To Say” (# 11) that rim the cycle. The already related “night landscapes” of “My Soul” (# 3) and “To The Dream” (# 9) are adorned by marvelous figurations. A slightly mournful major triad with the tranquil singing around thirds can be heard in nearly all songs and constitutes a very expressive presence in F. Sologub’s “My Soul” (# 3) and F. Tsjutsjov’s “Last Love” (# 10) in particular. Once more, the poetry “sings itself”. Nevertheless, the composer’s voice is not to be heard, although it is marked by a permanent sotto voce and leggiero. Both the text and the music are dominated by the homogenous elegiac tone that does not differentiate between the “higher” and “lower” degrees of poetry. The vocal part submerges and resurfaces in a vibrating and transparent maze of sustained piano sounds. The intensity of the maze’s inner life gradually reveals itself. The individual voices trill with the subtle rhythmical incongruities. The tonal movement is completely unpredictable. The gradation of the tranquil abundance in both tone and agogic color is seemingly inexhaustible. Quite often, the pianist does not want and is not able to subside immediately, even though the recitation of the actual poem is long finished. He meditates through a reverberation, a postlude, that follows nearly every poem. It is not a coincidence that Silvestrov distilled a practically unique and highly personal type of instrumental music from these song reverberations; he has created Postludes for violin, cello and piano, a Postlude for piano and orchestra and even a full-fledged Postsymphony, as is the title of Silvestrov’s Symphony # 5.

All songs are performed attacca and there is no real ending to the series.

It is almost as if this poem by F. Tsjutsjov inspired Silvestrov to say an endless goodbye to the ideal world embodied by poetry, a world that is forever lost. The ultimate goal of the cycle consists of reminding us of the everlasting importance of this ideal world. Two vocal pieces for piano, that bear a strong stylistic resemblance to the songs, represent the master himself. It is Silvestrov who performs these “wordless songs” in his own unique way: “Very tranquil and transparent, leisurely listening, … it is rather like dozing”. Thus, the CD concludes with the composer’s personal touch. It is a prelude destined for those individuals who wish to open up their hearts and minds to Valentin Silvestrov’s music.