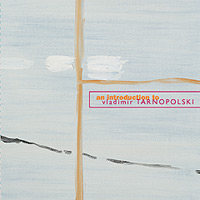 Born on the 30 th of April 1955 in the Ukrainian town of Dniepropetrovsk,Vladimir Tarnopolski enrols in courses at the Moscow Conservatory, where he studies composition with N. Sidelnikov and E. Denisov and musicology with Y. Cholopov. His first compositions date back to 1973 and 1974 (pieces for piano, melodies written on poems by A. Blok) and were followed by a Quintet for wind instru-ments (1975), a Trio (1977) and his graduation piece Cello Concerto (1980).This composition marks the beginning of a long period during which Tarnopolski engages in a musical quest with unusual characteristics. As he does not shun either aesthetic controversy or discussions about points of view on music, he wields both a critic’s and a musicologist’s pen without the slightest inhibition. Several compositions refer to music history : Bach with the choral Jesu, deine tiefe Wunden (Jesus, Your Deep Wounds, 1989), C.M. von Weber with the parody on the opera The Three Graces (1987), Wagner with an ambiguous homage (Wahnfried I, 1986), Moussorgski with After the Reading of Sketches (1989), Tanejev (Variations, 1983), Chostakovitch (Music in Memoriam, 1983), Hommage à L. Nono (1990), and O. Pärt-Op Art (1992). When examining his repertoire, one might entertain thoughts of eclecticism and post-modernism. These labels, however, are ambiguous. The heart of Tarnopolski’s music lies elsewhere.

Quite a few compositions reveal a composer who is not afraid of summoning the type of great dramatic tension which is more easily associated with Varèse’s or Berg’s expressionism than with Schnittke’s or Pärt’s post-moder-nism. Consequently, the turmoil of the last decade is reflec-ted in most of his recent work : Psalmus poenitentialis (1987), Kassandra (1991), and Welt voll Irrsinn(1993), based on Kurt Schwitters. In Ausklänge des vergangenes Tages (1990) he alludes to historic truth in no uncertain terms. Der Atem der erschöpften Zeit (1994) and Landschaft nach dem Schlacht (1995) run along the same lines. Inspired by Rilke’s Duineser Elegien, he writes these last two pieces on the occasion of the fiftieth anniversary of the end of the war. Tarnopolski’s last composition carries a French title : Le vent des mots qu’il n’a pas dit (The Wind of the Words He Did Not Speak, 1996). Apart from telltale titles, Tarnopolski also attaches a great deal of importance to the formal concept, which he tries to keep within a generally restricted dimension, always with an eye for detail, texture and timbre.

Tarnopolski also plays an important part in the evolution of contemporary Russian music during the perestroika and the following years. Together with Edison Denisov and Dimitri Smirnov, he founds the new Association for Contemporary Music, thus reviving the ACM that had been so vital to the Russian music scene between 1923 and 1931, at a time when innovation was still applauded. In 1992, Tarnopolski becomes a professor at the Moscow Conservatory. He creates a Russian chapter of the International Society for Contemporary Music and founds the Studio for New Music that gives a great many concerts and participates in many recordings, viz. for Megadisc. Finally, in 1994, he organises a Festival of Contemporary Music : the Moscow Forum. As far as the international scene is concerned,Tarnopolski collaborates with orchestras speciali-sed in contemporary music such as the Ensemble Modern from Frankfurt and the Schönberg Ensemble from Amsterdam, with the Symphonic Orchestra of the Bavarian Radio (Munich) and with conductors such as Rozhdestvenski, Rostropovitch, Metzmacher, Reinbert De Leeuw etc….

Apollo bestows the gift of prophecy upon the Trojan princes Kassandra, but as his love for her remains unrequited, he takes revenge by making sure that Kassandra’s prophecies serve no purpose. The interrogation of the future and the incredulous uncertainty evoked by this myth simultaneously inspire Tarnopolski and his colleague at the Moscow Conservatory, Elena Firsova (born 1950). Tarnopolski’s score, however, is written against the background of a premonition that comes to him on the eve of the putsch that turns Russia upside down in August of 1991, whereas Firsova’s composition is written a year later. The obstinate prophecies of the oracle are rendered by a frequently recurring chord that serves as something of a leitmotiv throughout the various episodes, all of which are dominated by vertical harmonic structures without actual melodic development. These sonorous incantations of great orchestral richness (and not devoid of the use of electronic means) give birth to opposite movements of concentration and separation that persist until they come full circle and the composition ends with the same breath that we hear at the start of the piece.

Eindruck – Ausdruck II (1989-1992) This second version of a piece for piano originally written in 1989 is a musical confrontation between sounds and voices, as the piano’s major importance is counterbalanced by a rather sizeable orchestral ensemble. As the title indicates, these contradictions occupy a prominent place in the concept of the work, which presents itself as something of a kaleidoscope of sonorous colours.Tarnopolski himself evokes Vassili Kandinski’s style of abstract painting with its dialogue between dots and lines, white and colour, surface and volume. The aesthetic form of this partition should also be seen as a homage to an era which the composer considers to be the golden age of contemporary music, viz. the end of the sixties with Berio’s Sinfonia (1968), Ligeti’s Lontano (1967) and Stockhausen’s Hymnen (1967).

Echoes of the Passing Day (1989) for clarinet, cello and piano The composer associates this musical trio with a collection of dramaturgic sounds (respiratory sounds/expiratory sounds, marching boots) and words : Lenin’s famous pronouncement Chto delaïet ? (What should we do ?) (*1) or, near the end of the partition, a few short quotes from Joyce’s Ulysses. The instrumental post-modernistic theatre is only a breath away, an impression that is reinforced by allusive quotes : Beethoven’s famous bagatelle 59 Für Elise and the American song “Elisabeth”. This choice is entirely justified, as it is dedicated to British cellist and musicologist Elisabeth Wilson who, for many years, lived in Russia (she was ambassador Duncan Wilson’s daughter). For this reason, she remains one of the most important Western witnesses to Soviet musical life as the author of the remarkable work “Shostakovitch, A Life Remembered”, published in 1994.

Choralvorspiel “Jesu,deine tiefe Wunden ”(1987) This partition is even more closely connected to instrumental theatre than the previous composition. In the late eighties, this instrumental theatre marks the work of several Russian and Ukrainian composers (Schnittke, Ekimovski,V. Martinov, Silvestrov), influenced primarily by Mauricio Kagel. It is a time when, thanks to Gorbatchov’s perestroika, the musicians of the Bolchoi Theatre, the ultimate bulwark of institutionalised tradition, establish a

Soloist Ensemble.The initiative is taken by A. Ivashkin and A. Lazarev and the Ensemble’s repertoire consists of contemporary Russian and Western music. As a matter of fact, this partition was specifically written for this Ensemble and it is created by them in Cologne in the spring of 1987 under the direction of A. Lazarev. Around the melody of a protestant choir, Tarnopolski weaves a web of what one might call a mini-Passion, played twice by the musicians as the importance of their instrumental role is superseded by that of a dramatisation of the events which are evoked. These events range from the flagellation to the crucifixion and they are illustrated by the percussion instruments in particular. The percussion instruments not only stand by themselves but are also divided among the wood-wind instruments and the brass instruments that play the role of the choir. Finally, a trio of strings represents the Holy Trinity and expresses Christ’s suffering and man’s compassion. This religious contemplation illustrates an aesthetic attitude as defined by Tarnopolski : he inverts the words in the title of Schönberg’s work “The Style and the Idea” to assert that Idea prevails upon Style, that the aesthetic and spiritual contribution of the artist prevails, that by way of style music is enabled to express everything. Frans C.Lemaire

(*1) This is the title of a novella by N. Chernyshevsky, written after his arrest in 1862. It describes a prophetic vision of his hopes for a new humanity. Lenin was to quote Chernyshevsky in his writings.